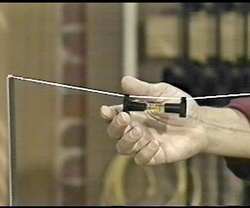 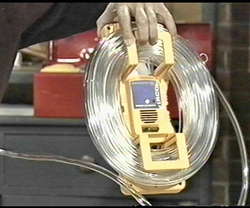 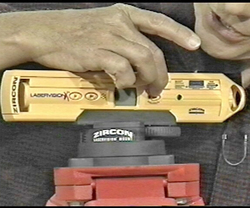 When we are working outdoors we often need to create level lines over long distances. Up to about 8 feet, we can simply tape our regular carpenter's level onto a straight board. But there are many different ways to level over dozens, even hundreds of feet.

The least expensive and most common is the "string level".

This is simply a small glass level with two hooks that allow you to suspend this light weight gadget on a layout string. But people make some serious errors in using this level, in fact it often requires two people to use it right. The string in the picture is sagging. Reality is that no matter how tight you pull the string, it will still sag a bit. If you put the level anywhere except right in the centre of the string, it will be running up-hill on one side of the sag or the other. This will mean that the two ends of the string will not be at the same height by the time you get the level to read level. If it is sitting in the middle of the string, the sag on each side cancels out and the string level gives us a pretty good level line. Also you have to be sure that the string is not touching anything. Strings don't make straight lines unless they only touch on the two ends.

You can get even more accuracy with a water level.

This is a hose or tube almost filled with water. You lay the tube out on the ground, fill it with water and then pick up the two ends. If the whole tube is lower than both of the ends, the water will stand at exactly the same height in both ends of the tube or hose. Put one end on the reference height (a fence or deck post, or on a stick exactly 3 feet above a landscaping level) and then raise and lower the other end of the tube. If you raise one end of the tube, you cause the water to rise in both ends. If you lower one end, it will lower in both ends. One person watches the water level on the reference end and shouts out when the water reaches the mark. The level on the other end of the hose will be at exactly the same height, even if it is 50 feet away and around the corner of the house.

To avoid having to work with two people, Zircon has built the electronic water level that you see in the picture. You screw or clamp the yellow gadget to the reference height. When the water rises to the right height on this end, it will sound an signal loud enough that you hear it on the other end of the tube.

Much quicker, and higher tech, for line of site levelling, is a laser level.

The one we used on TV was installed on a Tripod. Many laser beam are now installed on levels. This particular one has the unique feature that the laser beam blinks when it is not level, blinks faster when it is almost level, and stays steady when it is dead level, allowing for an incredible accuracy. Shoot this over the top of the joists on a deck, and you can put your measuring tape from the top of the joist to the laser beam to know when they are all exactly the same distance below the horizontal beam.

Less accurate but very convenient is a laser beam attachment that you clamp onto your own carpenter's level, now commonly available in renovation centres.

Knowing where the real horizontal is will help to get landscaping water to flow where you want it to, get fence posts in line, make a deck flat, even let you know how much you have to raise the floor in one room of an old house to build a new floor flat through the house.