WHAT IS THE NEUTRAL PLANE? 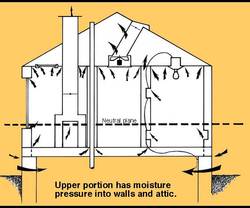 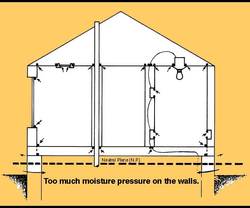 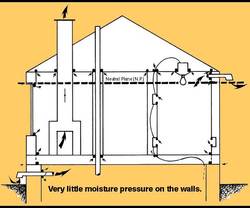 Cold air will generally sneak in (infiltrate) at the bottom of the house and warm air will leak out (exfiltrate) at the top of the house. This is called the "stack effect" caused by the rising effect of warm air. In between the top and the bottom there is a narrow band all around the house walls where air neither comes in nor goes out. This is the neutral plane, or point of no pressure.

If the air enters the lower portions of the house more easily than it goes out the top, this will pump the house full of air, creating a balloon-like pressure trying to get out. In this case, the neutral plane will be low.

If the air in the house can get out the top more easily than it can come in at the bottom, this will create a partial vacuum, sucking air from the top and putting most of the wall surfaces under inward pressure. In this case the neutral plane will be high -- and this is just what we want.

The position of the neutral plane does not depend on how much air is going through the house (how drafty it is) but on the relative ease of entry at the bottom and exit at the top.

The neutral plane in a house is more or less clearly defined depending upon the relationship between stack effect and wind. In a downtown Montreal apartment quite sheltered from the wind, the neutral plane is so steady that older apartments, polluted for years by inefficient oil space heaters, have black marks in unweatherstripped doorways in the upper half only -- clearly marking where clean air was coming in on the bottom and dirty air was going out on the top. In a prairie farm house where the westerly winter wind is very constant it is common to find moisture problems caused by exfiltration of humid air over the entire height of the east wall. In Newfoundland where heavy winds are always present but constantly changing direction, the wind is dominate over the stack effect and except for the extremes of the ceiling and the basement it is difficult to say that there is infiltration or exfiltration on any given part of the wall. Despite these complications brought on by the wind, the efforts described later on to raise the neutral plane will help to protect a house from moisture damage -- even in Newfoundland. The more the house is made air tight, the less effect the wind has on the inside of the house, the more the stack effect becomes dominant and the easier it becomes to control the neutral plane.