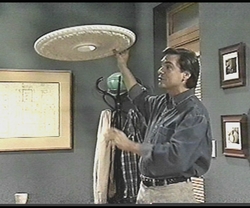 John in Scarborough wanted to put a ceiling fan above his stairwell, but the existing electrical outlet was not in the middle. He tore the whole ceiling up (attic insulation and all) to manage to move the box over to the middle.

We talked about his project and then I showed him the new light weight "rosas" or plaster ceiling decorations. Today you can get them made out of foam plastic, but once painted they look just about like the real plaster ones. They come large enough that John could have simply left his box where it was, covered it with the rosas, all while placing the rosas in the centre of the stairwell. All he really needed to do was to make sure that his fan was solidly connected to a ceiling joist or a board placed across the joists to insure the weight of the fan was secure.

I'm not sure he appreciated learning about the decorative cover-up after his mess was already made.

Balmer Studios in Toronto made those used on the TV show. They make both real plaster and plastic decorative moldings. They are often available in large renovation centres.