WHY ARE THE TEMPERATURES OF THE BASEMENT SO DIFFERENT FROM THE REST OF THE HOUSE? 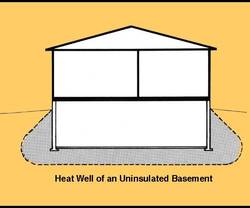 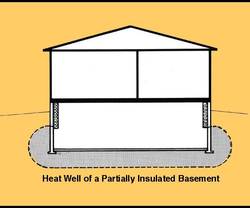 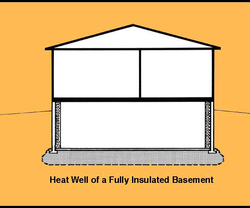 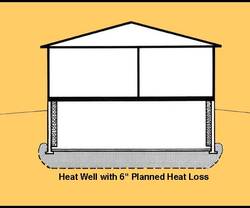 There are four special temperature considerations in the basement.

The air temperature in the basement is not always the same as that in the rest of the house. In a house with exterior basement insulation, the massive foundation wall is warm and slows down temperature changes (hotter or colder) in the basement. Hence, the basement is usually warmer than the rest of the house when the upstairs thermostat turns the furnace on and will overheat before the furnace is turned off. The temperature difference is usually acceptable, but if you want a really comfortable living space in a basement that has exterior insulation you should either minimize the heat duct flow into the basement or install a separate heating system with its own thermostat. In a basement insulated on the inside, this temperature difference will be much less noticeable because only the floor is part of the thermal mass; the concrete wall is outside the insulation. Partial insulation in the basement will have a partial effect.

The earth around the basement is an insulation. Dry granular earth is better than wet earth and very high water tables reduce the earth's insulating value almost to nothing. The earth's insulating value is very complex and depends on the composition of the soil and the depth of the basement. The deeper you go, the warmer the earth and the slower it cools a basement wall.

I have explained before that insulating one wall will not increase the heat loss through another wall that is not insulated. This is not exactly true in the basement, but the difference is not important enough to worry about it. For the purists who like to worry: this rule holds when working around the underground basement, but not when working from top to bottom in the basement. Insulation 600 mm (2 ft) below ground level blocks most of the heat loss from the basement into the cold surface ground, allowing the cold to penetrate even deeper. This lowers the temperature outside the lower portion of the basement wall and hence increases the heat loss from this lower portion of the wall. The additional heat loss is real but not particularly significant.

Heat escaping from an uninsulated basement creates a temperature zone in the mass of earth surrounding the basement that is significantly warmer than the rest of the earth -- this is often called a heat well. It protects the basement against temperature changes, expansion (and resulting contraction) and frost heaving. At today's fuel prices, this is an expensive way to protect a basement. As we insulate the basement, this heat well is reduced in size (and in cost), bulging out wherever the insulation stops. A totally insulated basement, including walls and floors, would still have a heat well because we can't completely stop heat losses. But it would be very small and perhaps even below freezing most of the time. Heavy inside insulation, with little or no heat loss allows ground temperatures and foundation wall temperatures to drop below freezing but only under rare conditions would this cause frost heaving problems. (search keyword "damage" for the title "WHAT IS BASEMENT FREEZE SHIFTING?")