WHAT IS BASEMENT FREEZE SHIFTING? 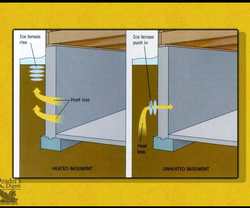 There are two basic mechanisms which can cause a basement to move because of freezing temperatures -- ice-block formation and ad-freezing.

Frost heaving: a form of ice-block formation occurs when moist soil lies under the foundation footings and the frost line or freezing-point penetration reaches deep enough into the earth to form expansive ice directly under the footings. This lifts part of the foundation up cracking the wall. In warmer weather the foundation usually settles back down. This mechanism explains why when building, we always install footings below the normal frost line. This also explains why the front porch on the old farmhouse moves up and down every year: the posts that support it do not usually go deep enough and are too far from the basement to be protected by any heat loss. Walk in basement stair wells often have frost several feet below the bottom of the stairwell, well below the footings of the basement. They should be insulated under the slab to prevent the cold from reaching down so low.

Ice-block formation can also cave in a foundation when water saturated soil surrounds the house. As long as the basement is heated, even a little heat loss will tend to keep this ice mass from pushing inward toward the basement, but rather it will tend to push upward. If the basement of a closed cottage is allowed to reach winter outdoor temperatures, then the ice will push both up and inward, giving us the forced inward foundations we often find in the cottage in the spring. Good landscaping can prevent the saturated soil conditions that are necessary for this to happen so that even if things do freeze, there is not enough water to create an ice block, or use a well draining soil that will not hold water.

Ad-freezing is the most bothersome form of freezing. Heat is dissipated upwards into the atmosphere causing the soil to cool. When the top layer of soil reaches freezing temperatures it forms a horizontal layer of ice. If the soil is a clay type of soil, the bottom of this layer of ice sucks water from below, thus becoming thicker as the soil below becomes dryer. When the soil is too dry to allow the capillary action of water upward, the temperature then begins to penetrate lower until it reaches water and forms another layer (or lens) of ice. The end result is a series of ice layers, the total of which is larger than the original soil volume -- meaning that everything has shifted upwards, or more precisely in the direction of heat loss.

Under certain conditions, these ice layers can latch onto the surfaces of poles or foundation walls, lifting these upward with the ice field. For a basement wall, this means a horizontal crack across one or all of the walls as the house is lifted by the "upper portion" of the basement wall. Unprotected support posts or wing walls are especially vulnerable to this problem, often carrying portions of the house up with them.

Every one of the following conditions must be present for ad-freezing to present a problem:

-- There is no heat source to break the bond between the ice lenses and the post or wall. (Heavily insulated basement walls will allow the soil to freeze right next to the wall, but still have enough heat loss to weaken the bond between the ice and the wall -- hence preventing problems with the wall. Prairie research has shown that you can have full height basement insulation, inside or outside and not create frost shifting problems, as long as the basement is heated. Unheated basements have no such protection.)
-- The soil is a clay type which can conduct enough moisture upward through capillary action to furnish water for the building of ice lenses.
-- Sufficient water is present in the soil.
-- The surface of the wall is of such a nature as to allow the ice lens to grab a hold. (Cinder blocks are more vulnerable than poured concrete.)
-- Frost penetration is deep (cold winter with little or no snow cover).