Oil smell from a furnace 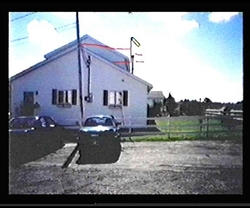 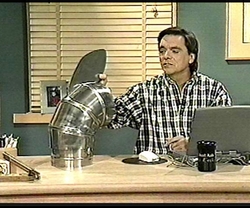 Tom in Newfoundland has problems of oil smells when the wind blows a certain direction.

As you can see in his photo, the chimney is low for his own roof, and then overshadowed by the roof of the larger house -- causing the wind to blow right down the chimney. The rule of thumb is that if you measure horizontally from the chimney to the roof 10 feet, at that point, the chimney should be two feet higher. In this case he is about four feet too low, despite the fact that he already has a long chimney. That is why chimneys close to the ridge of the roof work better, they don't have to stick out so far.

One thing that Tom could do that might help him out without having to raise the chimney is to add a draft assist cap. This cap turns in the wind like the old weather vanes, and always presents it opening away from the wind. This way the wind is always causing a suction at the top of the chimney and can never flow into it.

The only problem, you must grease the bearings with white grease every year or two to avoid squeaking.