The evolution of "speedways". 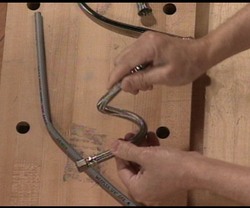 In the old days steel pipe ran right up and attached directly to the bottom of faucets. With the advent of copper piping, this too ran up and was hard connected to the bottom of the faucets. Both of these were serious plumbing installations that had to fit just right. Then someone invented a flexible pipe that would go between the main piping and the faucet, called appropriately ?speedways?. The first of these were made of small diamater flexible copper and although much easier to work with than rigid piping, they had their own problems of kinking and compression fittings that didn?t always seal or re-seal tightly.

The new speedways that are made of flexible plastic with a metal jacket work so well that there is no reason to buy any other cheaper product for this task. Don't waste your time trying to save a few pennies.