Copper is a trusted and proven piping for residential water systems.  For years people have been interested in one form or another of more flexible plastic or mixed metal/plastic pipes that could be snaked through a house with fewer joints and easier installation.  Unfortunately there have been many problems with most of these non-copper systems.  Poly-B was the worst with plastic connectors bursting and even the pipe itself developing holes – this piping has proved to be a real disaster and yet CSA still lists it as an approved piping.  A whole range of Pex-Aluminum-Pex pipes seemed to hold up much better although with time it was discovered that the pipes started to split open (I even have two pipes in my house that have not broken yet.)  The most reliable was simple PEX pipes, often used for in-floor heating, although even there, in installations made prior to 2007 it was discovered that the brass fittings corroded prematurely.  With certain mineral conditions in the supply water, the zinc in the brass leached out, weakening the fittings. All of these elements have had past or current successful Class Action suits against the manufacturers.  Follow this link for the legal and financial details of the class action suits. 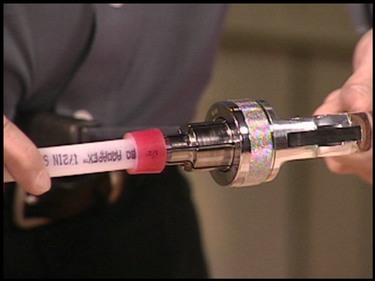 Today I believe it is safe to say that PEX pipe (not to be confused with Poly-B pipe) with the new post 2007 fittings, mostly plastic, remains a reliable industry standard right up alongside copper.  It is used for everything from under-the-floor heating systems to drinking water.

We showed on the show the amazing "memory" of PEX that is used to create tight joints. In one method for making connections with PEX, a special spreader stretches open the end of the PEX tube that has an additional PEX collar over it. Then you slide a connector in while it is open and the piping closes almost immediately to a permanent seal because it "remembers" how it was originally formed. There are a number of other methods for making the connections, including by crimping, where you slide in slightly smaller connectors and then clamp them into place. Both of these techniques require professional tools. 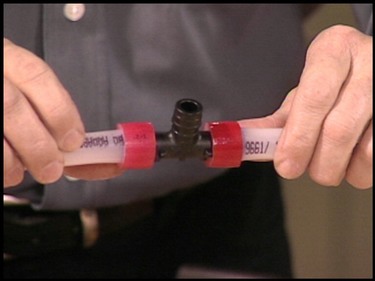 One of the advantages of PEX is that it is flexible, which means that you need many fewer joints than with copper pipe, and you can run it through walls like electrical wiring. It goes in faster, and some claim that this PEX type of piping will last longer than copper. Most jurisdictions now accept it as equivalent to copper. The only drawback for the moment might be that it is more difficult to make DIY additions to your plumbing.