How do you cut crown molding in an electric mitre box? 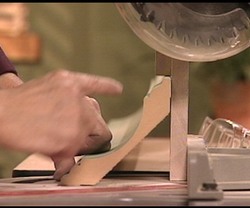 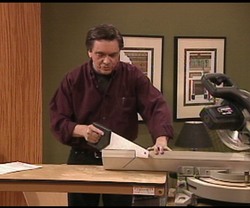 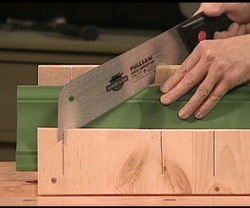 Crown molding is traditionally cut at a straight 45 degree miter with the molding sitting upright in the miter box. The only trick here is to realize that the saw bed is the ceiling, and the saw fence is the wall, so your molding is sitting upside down in the box. That was fine when we used hand saws because we could always just raise the fence on the little miter box to make it work. But now that we have power miter boxes, we run into the problem that the saw often cannot cut the full depth of the molding. One trick is to cut what you can, and then use that cut to guide a hand saw to finish the job. This trick is actually quick, easy, and quite accurate and works for both the left and the right cuts.

But then consumers kept demanding that the saw companies put a bevel feature on the miter boxes, to make it possible to cut a compound miter/bevel. One of the manufacturers did this, and all the rest had to follow. It sounds like a great idea, but try it once and you will go back to some other technique. In fact I have never figured out any really good use for the bevel feature on a miter box, except perhaps a 45 degree bevel cut straight out from the fence. You see, you need to cut one side to a 31.62 degree miter with a 33.66 degree bevel. Now they have put a stop on the miter at this point, but can't put a stop on the bevel side. So you kind of put it to the right place, maybe. Then you cut one side. The other side becomes a problem because the bevel only bends one way -- so you have to cut the second side upside down and backwards? And try to keep all the pieces straight. You as a consumer have to be careful about what you ask of the manufacturers, you might just get it. Sliding power miter boxes are great, but forget the compound miter/bevel.

To do this job efficiently, build an oversized miter box, with the bed just the right width to hold the molding in position and use a hand saw. It is quick, easy, and accurate. Use the power miter box when the molding is small enough to fit.

For a more complete overview including a mitre saw mitre/bevel angle chart, check out Cutting Crown Molding With A Mitre Saw.