DIY -- Removing condensation from inside a thermal pane window. 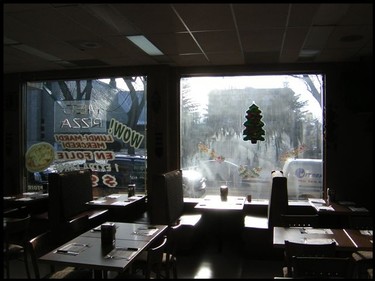 When condensation shows up inside a thermal pane double window (between the two pieces of glass), you know that the seals around the edge have been compromised, allowing moisture to get inside. These cannot really be re-sealed so the standard response to this problem is to replace the glass unit. That is expensive.

So, if it looks like the only way you're going to be able to see out your window is to buy a new window pane, you may want to try drastic surgery first. It doesn't always work and you do run a fairly high risk of cracking the glass -- but it often does work and will give you years more service out of the same window. 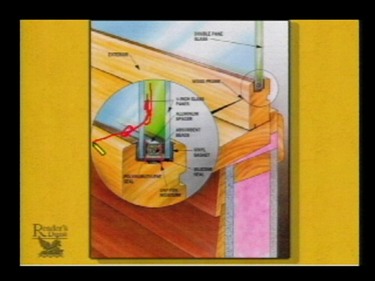 Before I tell you how to attempt it yourself, as we did on the TV show, you should know that there is now a commercial process for doing this professionally and far better than a DIY job. Check out Professional Services.

What we want to do is to drill two small holes on the bottom of the outside piece of glass. When the sun shines on the window, it will warm up the air inside the unit, which will pick up some of the condensation. And because the air is expanding, it will move out through the holes. When it cools down at night, the cooler air coming in is always dryer. So, this once-a-day breathing process will actually very slowly clear the window out -- most of the time. There are several catches: The original source of moisture has not been blocked so you may occasionally see new moisture that has to bleed out slowly. If rainwater goes in these holes, you will be worse off than you were. If you don't screen your new holes, you will find spiders inside your window. If it is hot and humid during the summer where you live and you have air conditioning, the holes will work backwards and fill the window with water, so you may need to plug the holes up during the summer (moisture will always move from hot to cold).

The professional services do it slightly differently in that they drill one hole on the top and one on the bottom because they actually wash out the space between the windows. Then they have a super little filter plug that makes it all work even better. 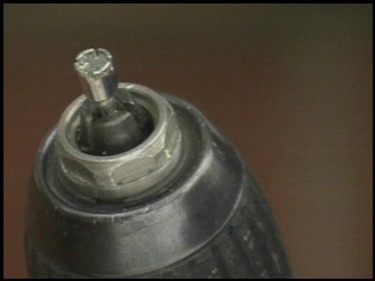 So, still want to give it a try yourself? First, don't use a regular glass drill -- I have cracked some windows with those. Buy a 3/8 inch diamond hole saw for under $10, now available at most hardware stores for working on ceramic tiles. 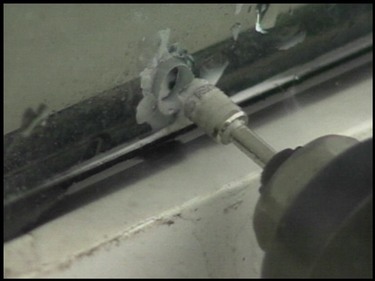 Drill the holes at an uphill angle and be real patient. Do not work in the sunshine or extreme cold weather as any extra stress on the glass could kill it. The glass may already be under stress, the same stress that caused the seals to fail in the first place. Keep the drilling process wet with water. Wear gloves and glasses. The only good news about failure is large patio doors and other large glass will be laminated, like your car windshield, so if you shock it just wrong -- like in the last two photos, it cracks all over but the plastic sheet in the middle holds it together -- and gives you time to get a new window. I warned you -- only attempt this if you are ready to change the window or door anyway. 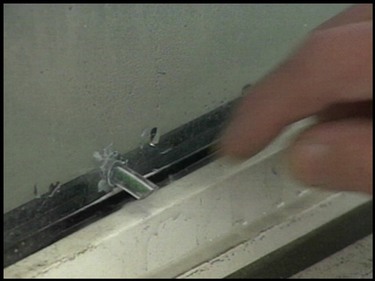 If you succeed like in the first photos, not like the last photos where you now have very classy spider web like cracks all over the window, put about one inch of plastic tube into the hole and glue it into place with some Goop or silicone. Gently put a little bit of Scotch Pad into the tube as a bug filter -- not enough to block the air movement. Then be patient. It should take from 2 to 12 weeks to work, depending on the temperature. The colder it is, the faster it works. The one we did for the show didn't seem to be working at all until, in just a couple of days, it suddenly became completely clear. I think I had the filter too tight the first six weeks.

It didn't work? Well you were going to have to change the window anyway . . . -- unless of course you skipped trying it yourself and got the professionals to do it for you. 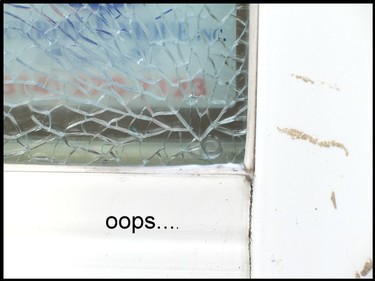 Wayne writes that the professionals refused to even try his window because it was made of tempered glass and there was too much risk of shattering, like in the photos.  He asked if it was possible to drill in from the side of the frame, through the seal that holds the two pieces of glass apart  in order to accomplish the same thing without drilling through the glass?  The answer is Yes.  You can go in from the side but the "tunnel" must exit on the outdoor side of the window (or else in a cold climate it will pump moisture into the window space rather than remove it).  You have to be very careful to not hit the glass when drilling -- but if you do you were going to have to replace the window (door) anyway. 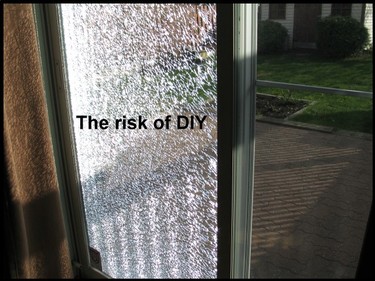 Drill in from the side, then drill to that "tunnel" from the outside of the frame, avoiding the glass.  Then plug the entry point on the first drill.  That will leave you with a right angle channel to the outdoors.  Make sure you have at least 1/8" clear -- make a bigger hole if you are going to put a screen or filter on it to keep the spiders out.  In fact you can make a minimum hole through the seal into the window area, and a larger hole through the frame to this channel - leaving more space for that filter and keeping a bit more air flow.  It can be difficult to know how much space there is between the pieces of glass -- never more than 5/8", often 1/2" and even common with less space.  So follow all the same rules as above except the hole low down on the window could even be drilled vertically up through the frame, providing an actual gravity drain to the window space in addition to the moisture pumping action.

Remember to do your financial math. If the window or door frame is really shot, don't bother to spend the money on getting the glass clear. If you have several years service left in the frame and hardware, then an investment in clearing the window should be worth it. In one place at one time (prices change all the time) having a new thermal pane installed in a patio door cost about $350, while having the old one professionally cleared with a 10 year guarantee was about $200. A whole new patio door installed was close to $1,000.