How do they test power nailers in the factory? 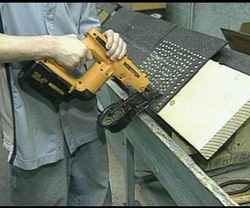 We had fun taking a TV tour of the Stanley Bostitch testing facility to see just how they test tools for long term endurance, power and reliability.

Then we took a closer look at their new cordless roofing nailer. This is quite a technological development -- it is the first nailer that runs on batteries. Pneumatic nailers deliver up to 35 hp to drive a nail in a single blow, and no reasonable sized battery could do that. So they found that what they could do is drive in a nail with a lot of repetitive blows, using the technology to drive nails with a hammer drill. It took two years to get it right, but they did it and it is now out on the market: 20.4V Cordless Industrial Roofing Nailer; model CRN38K.

The whole head section pops off for easy cleaning at the end of the day. The nails are special nails because the coil has to hold the nail in position for the first few blows, unlike a pneumatic nailer that breaks a nail off of the coil and fires it right into the wood. They even put the nails in a disposable plastic case so that workers can throw a coil up to the roof from the ground.

It sounds like a machine gun with the multiple blows, but it sure does put roofing nails in the right place and to the right depth even with changes in the density of the roof -- you just keep banging it in until you hear it bottom out. It is not quite as fast as a pneumatic gun, but much faster than a hammer and more accurate than either. And from the point of view of fatigue, easier on your hand and arm. When it comes to roofing nailers, there is a new kid on the block.