Which circuit breaker controls which outlet? The Circuit Detective. 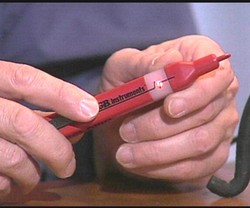 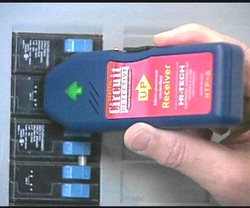 In this TV show I showed off two great electrical detective devices.

The first is called an Inductive Voltage Detector and can be found at automobile supply stores. The one I showed had the trade name Circuit Alert and was made by GB Instruments. Somehow it knows if a wire is connected to the hot side of the mains panel. So it will tell you which wire is connected to the circuit breaker, and which is not. It will tell you if the part of a wire you are testing (like a telephone or a car circuit wire) is connected to the source or not and where the break in the wire is, all without cutting into the wire's insulation. An amazing gadget.

Just as amazing are the modern 'Circuit Detectives'. Here you plug in a transmitter that sends a signal down the wire back towards the circuit. Then you use the receiver at the circuit or fuse panel and it points to the proper breaker. No more guess work. You no longer have to reset all the clocks in the house just because you were trying to find the right fuse or circuit breaker.  When it says it has found the breaker, it is quite accurate, but sometimes it has problems finding anything -- usually because of lots of other static on your lines or filters that you may have put on yourself to get better sound out of your hi-fi audio system.

Renovation centres often carry various models of both of these but it is at the auto stores like Canadian Tire that you are sure to locate them both.

Be careful. When neighbours borrow these gadgets, they don't always come back.