Water in the bottom of the window well.

Robert from Oakville, Ontario wrote: I live in a town house and only have two basement windows. Last year I cut out the wall on one of the windows and took out the 32" X 15" window and replaced it with a 32" X 24" window. It worked great. So this year I decided to enlarge the back window before finishing the basement. Since the one last year worked so well I decided to put in a 32" X 30" window to let more light in. I knocked out the concrete to the right size and went out side to excavate in front of the new window for the window well.

I only went 20" below the ground level since I only needed 15 additional inches for the window and 5" for gravel. Well I hit a level of water at about 20". This is strange since the ground slopes away from the house and is lower about 20 feet away. I live in Oakville and the ground is basically clay and water proof. 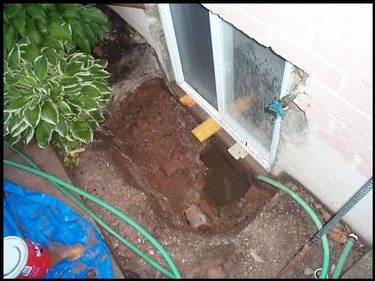 Ok, here's the problem: I thought I would put in the window now and worry about the water later, wrong! I haven't put the window in yet and it started to rain. The hole filled up past the height of the window hole and spilled into the basement. I siphoned out the water to the basement drain but it filled up again, slowly but surely. As I dug down, I hit a layer of gravel about 20" down and it is about 6" thick, then it's back to clay. This layer is acting as a conduit for the water to fill the hole since it can't go down. I also have a down spout near this area which may be adding to the problem. I'm going to extend the down spout further away from the house so that at least that will not be contributing to the water level. Should I get a post hole digger and keep going lower until I hit the weeping tile at the base of the footing or should I dig up the whole yard and insert a weeping tube towards the lower end of the yard (man that's a lot of work and mess) or should I brick up the opening up 6" and place a 24" window in and let the water level go up and down (I'm not sure if the water level has been going as high as 9" below the surface, which is where a 24" window will be. 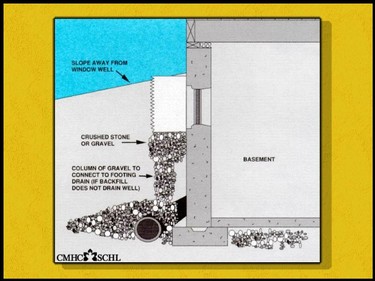 Here is a picture of how is should be done. The one trick is to use the post hole digger until you hit gravel, being careful not to cut right into the perimeter drain (assuming there is one). It will be located just below the level of the basement floor. Then when you are through the clay and into the gravel around the drain, put in the garden hose and let it run all day to see if it will fill up or not. If it fills up, you have a bigger problem, the drain is not draining. If it will not fill up, fill the post hole with 3/4 inch gravel (no sand) and give yourself a good foot of gravel below the window level.

Good luck and let me know how you do.

Thanks, I picked up a post hole digger, yesterday to try this exact thing, but I didn't think about the hose to test it.

I'll do it this weekend and let you know.

I extended the down spout which diverted a lot of the water, but you're right the water that's there is not going away, so I have to get to that gravel level below the basement.

There has to be a drain pipe at the base right? That's the way they had to build it right?

It must be that the back fill was mostly clay and over the years it became impassable?

I'll do it this weekend and let you know.

(Robert was hoping there was a working drain down there)

When I broke through the clay layer the water just drained away! I will fill it with gravel like in your picture. It looks like this is going to work.  -- Robert

There was light at the end of this tunnel -- or should I say, a drain.