Should cold air returns be on the ceiling or on the floor? 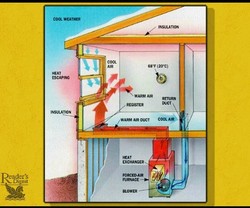 Pham from Hamilton asked why he sees air returns on the ceiling sometimes and on the floor in other houses, and what effect this placement has on air quality in the house.

If you are in the far north, or in the Southern US, the answer is simple. In an air conditioning climate the return duct goes near the ceiling to draw off the hot air and cool it down. In a heating climate, the return duct goes near the floor to draw off the cold air and heat it up. The problem comes when you use both heating and air conditioning.

Because heating is far more important in Canada than air conditioning, we generally put the return air ducts on the floor of each story of the house. Some sophisticated arrangements will extend the floor returns to the ceiling and include dampers that allow you to close off one of the ducts and open the other so that the system can work to its maximum in each season.