A look at a bad roofing job and how to hire a roofing contractor. 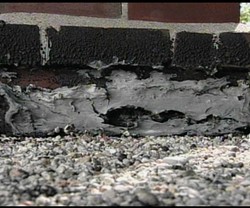 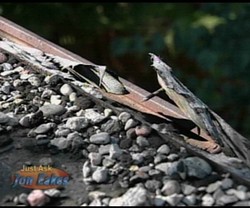 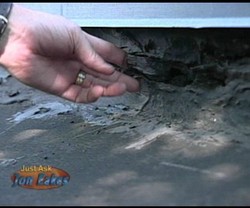 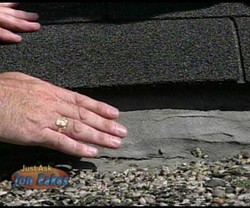 Annie has three roofs on her house, a shingled roof in the front part followed by an asphalt and gravel flat roof and then an elastomeric membrane flat roof over her back porch. They all seem to leak. The asphalt roof is only six years old, installed by someone who advertised in the local paper and has long since dissapeared. The shingle roof was recently installed by a friend. Annie empties the drip buckets herself.

We went to visit with Tim Mulroy, a professional and well established roofer from Avenue Road Roofing in Toronto. The asphalt and gravel roof was actually in pretty good shape, as it should be when it is only six years old. But the details around the edges were close to criminal (of course the roofer is today long gone). No flashings were provided up to the chimney and that was simply loaded up with asphalt or other patching compounds and as you can see in the first photo, gaping holes were directing water right into the ceiling below. Also that new roof was put on without repairing the wood, or replacing the old metal flashings around the edge of the roof, so all of this was simply rotting out from under the new roof as you can see in the second photo, allowing water in from the sides.

The elastomeric roof, which is like a rubber sheet that is heat welded at the edges was made of an under coat material, not a finished material and hence it had no protection from the UV light of the sun and was showing signs of premature cracking as you can see in the third photo. In addition it was not lapped up over the joint to the other roof, leaving gaping cracks in the patching material between the two.

It turns out that it is going to be easier to start all over on the two flat roofs, and remove a couple of rows of the shingled roof to allow for under-lapping between the two roofs, than repairing anything. All of this years before the major part of the roof would ever need touching. The lack of attention to flashings has condemned the whole rest of the job.

The friend who laid the new shingles on the slopped roof actually did a very good job of the shingles themselves, but totally forgot, or never knew, that he had to put the flashings on at the same time as the shingles around the chimney. Actually he simply tried to glue extra shingles to the chimney as flashing, a sure recipe for a future leak. At least this detail can be corrected without removing all the shingles.

Annie didn't know anything about roofs, nor about hiring a contractor. After all this trouble, and the need for a new roof ten years too early, Annie is ready to do a bit more homework before hiring another roofer. How do you separate the true professional roofers from the handyman who thinks he knows how to roof a house?

First, visit his place of business. It is not a problem if it is a simple warehouse with a small office, but if it is no more than a P.O. Box or a pick-up truck, you don't have much of a chance that he will be around when trouble shows up.

Second, ask for his certificate of insurance coverage with your province's Workman's Compensation board (CSST in Quebec). Call and verify that he is in good standing with this board. This is critical for two reasons. First, having a written contract with a contractor who is in good standing with Workman's Compensation releases you from all work related injury liability. Without this, you could be paying someone's medical bills for a long time if they slip off of your roof.

Third, ask for their certificate of Liability Insurance. Be careful. Some fly-by-night contractors will say they are insured while they are referring to automobile insurance, or theft insurance or something else. You want to see a million dollars of liability insurance and you want to telephone the insurance company to verify that the contractor you are hiring, who works out of the office you visited is in fact currently paid up on his liability insurance. Without this, when his stuff falls off the roof and injures a neighbour, or does damage to a neighbour's property, you are responsible, and your own homeowner's insurance may not cover such an event. A guy with no more than a pick-up truck can go bankrupt and the responsibility still falls to you, and then you may go bankrupt too. His Liability Insurance will protect you on that front.

All of that is just to find out if your potential contractor is a legitimate businessman or businesswoman. That will eliminate most of the poor roofers.

To find out if he knows how to build the roof is a bit more difficult. Here references can help, seeing past jobs. You can also find out if he is a member of the local roofing association, always a good sign although not a guarantee of quality. Listen carefully to the recommendations of each of the contractors that you are having give bids. You will learn things about quality and doing things minimally. Have them explain what you don't understand. Have them comment on things that the other contractors suggest or don't recommend. Decide if you want a quality or a minimum job, and let your contractor know before the contract is finalised so he has a chance to include what you really need in the final bid.

I used to travel across the country giving seminars called Get It In Writing.  You can find some really useful information on the Canadian Hire A Contractor web site.  Here on my own site you can look up Contractors and take a look at the three part entry on The Industry, The Contract, Seeking out the Contracotr.