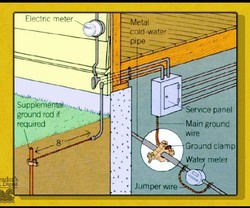 Nancy from Welland, Ontario has had a terrible saga with her electrical appliances literally blowing up. We have been writing to each other for some while now trying to find the elusive problem. Read it through, you may learn about how to hunt down problems, and learn a bit about electrical systems. The bottom line is they think, hope, maybe that they have the problem solved now and are watching it carefully.

-- Past owners have had problems with hydro's transformer box several years ago.

-- In January the hard drive on her computer went.

-- In June a second hard drive on her computer went and then the big screen TV blew a high voltage regulator.

-- Their neighbour is an electrician and he came over and tested some things on the fuse box. He said the should be at 115 volts but it was measuring 122 volts. Hydro claimed this was not an unusual difference.

-- The neighbour electrician suggested getting a sprinkler and soaking the ground directly outside the electrical panel. He wanted to see if the signal still bounced around once the area had been "waterlogged".

-- My husband put a grounding rod into the dirt outdoors and they grounded the panel to it.

-- The power still reads 122 volts, but it is now constant. We are praying. to be continued?? Keep writing to us Nancy, we all want to know if this really worked and will hold through the winter.

Is there a moral to be made here? There sure is. When we look at the house as individual components, we often get into trouble. We have to look at so many things, even the whole house, as systems. The electrical panel can be perfect, even the ground wire perfect, but then it is connected to a plastic pipe, the whole things falls apart as an electrical system. Note in the Reader's Digest drawing, there is even a ground jumper around the water meter. This is so that if the water meter is removed, the ground continuity still goes to a metal pipe buried underground. Even the electrician's thought that if the soil was too dried out was a good guess -- there would not be electrical continuity to keep the whole electrical system functioning correctly. Dry soil is rarely a problem, but this was a rare problem. In this case it appears that the error was human, a plumber changing the piping and simply reattaching the electrical grounding wire. After all, he was a plumber, or a home handyman, not an electrician. Household systems are often inter-connected.