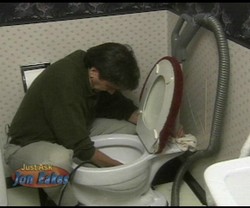 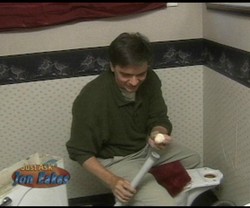 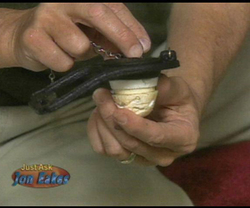 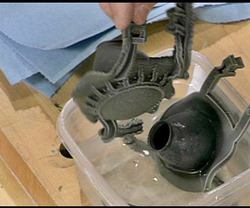 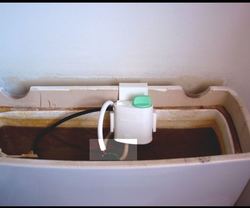 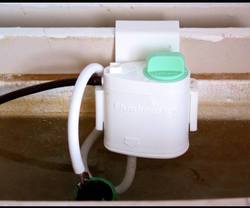 If you look at the first photo above you will see a very strange thing. I am running a vacuum hose down the backside of a toilet.

In the second photo you see what I caught with that vacuum hose, a little ball of polystyrene.

In the third photo you see where that little white ball belongs, on the inside of a toilet flapper.

This type of toilet flapper, rubber flapper with a white polystyrene float ball socketed into the under side of the flapper has been causing many consumers serious problems. With age, or perhaps with a bit of that cleaner chlorine, the ball drops off of the flapper. That sends it down the innards of the toilet, the water chase before the bowl, and it can't get out the other side.

Talking with several store clerks reveals that several clients have had to purchase a new toilet because they couldn't get this thing out. So when I stumbled upon a homeowner trying to fish his out (we were filming a tile job in the other end of the house), I thought of putting the vacuum hose on the hole where it went in, wrap it with a rag to keep the seal and then bounce it around by pushing up through the siphon assist inlet hole. It worked. It jumped up into the air stream and stuck to my hose. So I guess you can consider this a Jon Eakes recall of all this type of toilet flapper -- to avoid an eventual problem in your house.

Use the ones that have a built in rubber hollow space that cannot detach. Oh, and if you want to see what those cleaner pucks do to rubber, look at the last photo. We accelerated the process of degeneration of the rubber flapper by simply soaking them in water with the puck rather than the dilution you get in the toilet tank, but the end results are the same, that scallop look that begins to leak long before it should be necessary to replace the flapper.

However, I take my hat off to Fluidmaster who has come up with a new toilet bowl cleaner system; they run the chemicals down the overflow in the tank, so that the toilet bowl gets cleaned but you see no cleaner in the tank -- meaning that there is no contact with rubber parts like the flappers. They have a standard bleach based system and another 'blue' version that feeds emzymes this way slowly but continuously into septic systems while cleaning the bowl, a great idea.