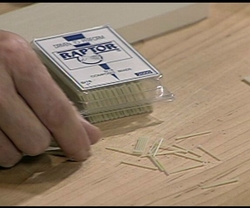 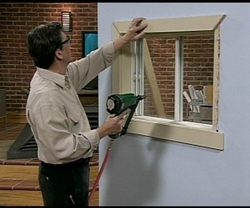 A couple of years ago (1979) I stumbled into Raptor Plastic Nails made in Texas and designed for just about every type of project except structural framing. They were all made to be used with pneumatic nailers. I wanted to test them in our climate to see if they would become brittle with the cold weather. Then I lost track of them. Recently, I discovered that Canadian Industrial Distributors, in Toronto, was a distributor for them and though we might have something really new to talk about. That is when I found out that I had been looking at the wrong potential problem. It is not the cold weather that is a problem, but rather the hardness of Canadian lumber. They tend to implode when shot into our tight grained 2x4's and the like. The only thing this Toronto based distributor found that they worked well with was interior trim, and he noted that you had to use a limited number of nailers because if the tolerances of the nail rack are not just right, they jam easily. Well, expensive rust proof nails for interior trim doesn't make a lot of sense to me. In Texas the lumber is simply softer, because it grows so much faster.

However, I haven't given up totally. Cedar is significantly softer than construction lumber. Perhaps these plastic nails would work with cedar fencing? That could be very interesting. Use brown nails that are brown through and through and will never rust to make a high class fence!