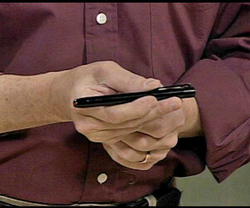 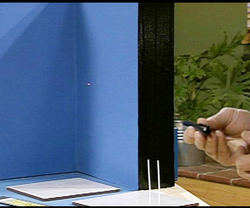 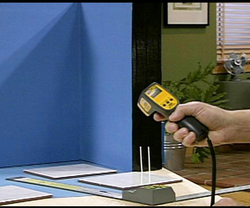 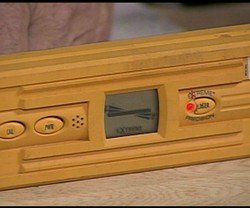 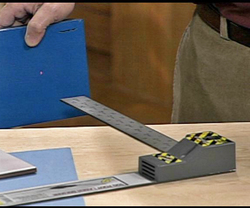 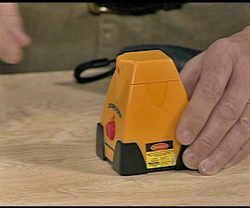 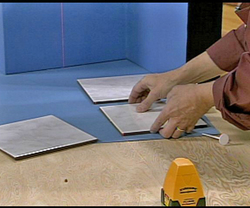 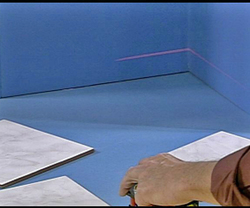 The high tech laser lights first came into common use as pointers. School teachers use them to shine a dot or an arrow on a distant wall.

Electronic tape measurers use them to indicate what surface you are measuring to.

Infra Red thermometers use them to indicate what surface is being measured.

Hunters use them to indicate where the bullet will go.

It didn't take long before the idea came to use them as more than just indicators, but as extensions to tools.

You can get a laser level attachment with a solid and accurate mounting mechanism that is designed to be added to your own level for about $70, allowing you to shoot a level dot hundreds of feet with your existing level.

You can get a fully electronic level with the laser dot from Zircon for about $200.

Laser Products Industries put two light beams onto a carpenter's square allowing you to square things for hundreds of feet, a great layout tool for both the house and the yard, at a price of about $170 .

But lasers can also be shot through a prism creating a line rather than a dot. Now the line is not as bright and cannot go as far as a concentrated dot, but a line can be very useful in renovation.

Zircon used to sell a Plumb Pyramid that shines a line across the floor and vertically up the wall, even self levelling and they say they have a new version coming soon for about $150. Now you can start to lay out tiles on the wall that match the floor, or line up wallpaper without a chalk line, or even plumb in window and door frames. The great thing about a laser line is that you can glue, paint, tile, paper and the line is always at the same place on top of anything, you never loose the guide.

Pros use lots of laser tools including motorised ones that spin around leaving a guide line on the wall for levelling ceilings, molding, concrete forms etc.

I showed a great little professional laser square from LPI that although in the $1,200 bracket, would send out 90 degree dots like the carpenter's square, switch to horizontal lines for levelling, switch to vertical lines for working on the floor and the wall together. Position it to its 45 degree position and it will line up a diagonal tile layout. In the horizontal line mode you can identify all variations in a floor for levelling before tiling and it has built in rechargeable batteries. Lasers generally make dots, can be forced to make lines and are now found in all kinds of tools both for guiding and for layout, with price tags to match everyone's pocket book.

All of this was on my TV show in 2002 and most of these products still exist 10 years later.  For an update on the latest of the professional laser projection systems check out my September 2012 Tool Talk column in the Canadian Home Builder Magazine.