Can I put a dimmer switch on a three way hallway light? 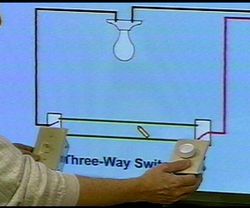 Rebecca from Cold Lake, Alberta wants to dim her three-way switchs. Can she do it? No and Yes. I know you like that kind of an answer. So read carefully. In fact I don't think I was perfectly clear about this when I did the segment on the TV show, judging by the confusion I heard after it was broadcast. So here goes.

A three-way switch does not just turn the electricity on and off, but it switches the current from one line to another. That is why the three-way switch has three screws on it. One is the common wire and the other two carry that common current to one line or another. In fact a three-way switch all by itself would be of little use for your light. It takes a pair of three-way switches as shown in the diagram to cause that re-routing of electricity that will cause the light to change whatever state it is in, on or off, to the opposite state when you reverse either one of the toggle switches.

If you simply replaced one of the three-way switches with an ordinary dimmer switch, it would no longer toggle from one line to another and would only go on or off and reduce the power of the current. The top of the stairway, bottom of the stairway reversing control would no longer work. You can however now find 3-way dimmer switches in the stores which have three wires out the back, like the three screws on the regular 3-way toggle switches, and that would replace one of the 3-way switches. A year after I wrote this page, Lutron showed me Multiple dimmer controls that can have up to 10 dimmer switches for a single light! I can't update TV shows, but I can update the web.

What you could also do is to put a dimmer switch on the common line leading into a pair of three-way switch. This would turn on and off the whole system, as well as have the possibility of reducing the light level. If you put one dimmer switch on each end, outside of each of the three-way switches, you would have to have both dimmers on and the end result would be a reducing of the power of the light by the sum of the two dimmers, so if all you want to do is to reduce the strength of the light, use just one dimmer.

All of that is to say that a simple dimmer switch cannot give you that top of the stairway, bottom of the stairway control, but can be used to reduce the intensity of the light, but you will have to remember to leave the dimmer on at all times for the rest of the system to work. You might even want to set it to the level you want and then remove its control, even decorate over the switch so that no-one plays with it. If you use a 3-way dimmer switch together with a 3-way toggle switch, the second switch could not change the intensity of light but just turn it on or off.

New multiple dimmer controls are more expensive, but they talk to each other to allow controlling the intensity of a single light from multiple locations.