Viewers are constantly asking me if there are alternatives to using pressure treated wood. In 2004 the wood treating companies 'voluntarily' withdrew the standard CCA pressure treated wood from the residential market. Ecological groups had lobbied long and hard to ban this product that contained amongst other things, arsenic. It has been replaced with slightly less effective preservatives such as ACQ. For the whole story on this long and unfinished debate, check out Living With Pressure Treated Wood.

Although much of the research, public and private, continues to support the idea that pressure treated wood does not pose any significant health hazard, even in kids playgrounds, it would be nice to find something that had no chemicals at all. 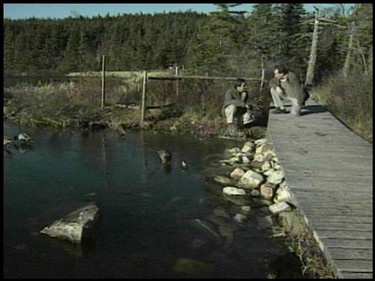 Dr. Wilf Nicholls, Director of the Botanical Gardens at Memorial University in St., John's Newfoundland is studying a possible natural alternative, Larch. In some parts of the country it is known as Juniper or Tamarack. This is a slow growing conifer that actually looses it needles every year. You often see it alongside the highway on the edge of the forest. I always thought it was a dying pine tree killed by the passing cars as it turned brown and the needles fell, only to learn that it grows best in this sunny area and loosing needles like leaves is natural. 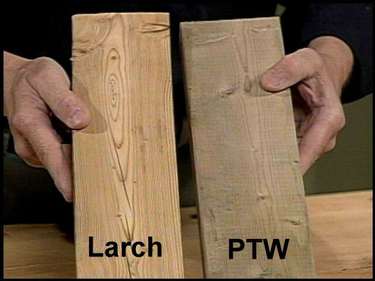 In a regular forest its slow growth means that it often gets beat out for sunshine but it thrives in marshland where other trees can't grow. It is a wood much harder and heavier than Cedar yet appears to have even more resistance to rot. Apparently it was regularly used as a replacement for oak in the bygone days of shipbuilding. In a marsh it may take 50 years to be ready to harvest, and even then it is not a really big tree. In good soil it can grow much faster and apparently maintains its resistance qualities, so cultivating it is a possibility.

Until now it was never seen as a tree that had a lot of commercial value, and since it was left to its very slow growth in the wild, it is in rare supply. Dr. Nicholls is impressed with his little boardwalk experiment in one of Canada's harshest climates so far. He'll be watching it carefully over the years to come. Maybe Larch is the real answer to the ecologist's dreams.

KEBONY wood is gaining ground for parks and walkways -- an ecologically responsible softwood treated to look and act like hardwood without pesticides -- see North On Sixety.