Can I have three light switches controlling one light? 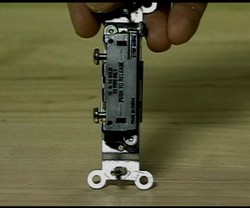 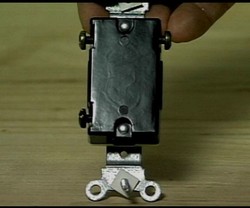 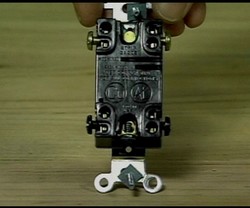 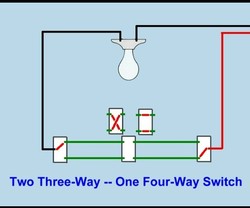 Chris from Toronto, Ontario writes: "In my new house, the light for the hallway has a switch at the bottom of the stairs and again at the top. The stairs are located at the front of the house and the bedroom is at the back. When we go to bed we have to turn on our bedroom light and then walk back to the hall switch to turn it off, or walk the 17 feet from the hall switch to the bedroom in the dark. How can I add a switch to the 3-way set-up already there?"

Probably the easiest solution to this problem is not dealing with the switches at all, but simply installing a motion sensor light at the other end of the hallway so that there would be light in the hallway whenever anyone walks down the hallway from either end.

However, wiring three switches to control one light is possible. First let's take a look at the back of several different light switches. A simple ordinary on-off light switch as in the first photo has two screws on it. The electrical line passes through and flipping the switch either connects or disconnects the flow of current.

A "three way switch" is not really three ways at all, but it does have three screws on the back side. One of the screws is the "common" and when you flip the switch, it either connects this wire to one or the other of the two remaining screws. So the electrical path is always through the switch, it just changes it from one line to the other.

A "four way switch", like a three way switch does not have four choices but only two. It does have four screws however. Here there are always two electrical paths through this switch. But as you can see in the schematic, flipping the switch changes tracks, or switches the two input wires to the two opposite output wires.

If you look at the schematic, and imagine the three switches in any given position, the light will either be on or off. Change any one of the switches, and the light moves to the opposite condition. This is pretty easy to understand in a schematic, but be careful to keep the wires straight in your mind when working with real wires. It doesn't matter where in the house you put any one of these switches, but you must respect the circuit diagram. One working tip is to print out this circuit diagram. Put numbers on every switch screw. Then as you figure out the real wiring, put those numbers on the proper wires. It will all make much more sense and you won't end up crossing some wires.