A bathroom fan switch in the downstairs hallway? 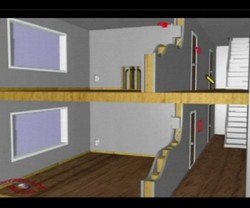 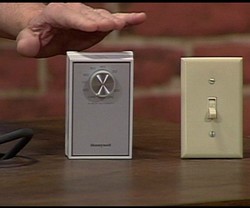 Chris & Dorie from Richmond Hill, Ontario write: "Last summer we moved into our new home. About a month ago, I discovered that the mysterious switch in our front hall operates the fan in our second floor bathroom?! Is this a fire code regulation? Why did they not try to "hide" the switch instead of placing it in the middle of our front hall?"

The only thing your contractor did wrong, according to the Ontario building code, was to not put a label on the switch stating that it was for ventilation. That's right. Rather than hide it as you would like, it is supposed to be even more evident so you don't have to "discover" what it does months after occupying the house.

In an effort to simplify and cut costs on new home ventilation the Ontario Building Code has several unique provisions, including permitting the bathroom fan to be considered your primary ventilation system. When this is your primary ventilation system, that switch is required, to let you know and to make it easy to turn on the ventilation when you may need it. New homes must have ventilation to control moisture and avoid mould and mildew. The Ontario building code has the lowest requirements in the country for accomplishing this. Myself, and many new Ontario homeowners, don't feel that these provisions are adequate for public health.

If there is condensation on your windows, reduce your moisture sources, and turn on that fan. You could improve the system greatly by replacing that switch with a special de-humidistat switch that will sense the humidity in that hallway and turn on the fan when it is too humid, leaving the fan on until the house becomes dry enough to avoid mould problems. Of course, all that hot air is being thrown outdoors. Personally I would not build a new home without a professionally installed Heat Recovery Ventilator which is an energy efficient whole house automatic ventilation system: check out "HRV" in the database.