Can I install hardwood floors on an OSB subfloor. 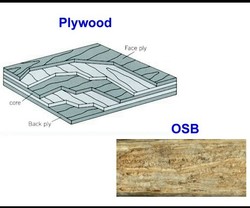 Ricky from Brampton, Ontario asks: "Is it better to put a pre-finished hardwood floor on OSB or on plywood? My sub-floor is OSB and they say I would have to lay 1/8" plywood on top of it. Would nailing or stapling determine the type of sub-floor?"

First of all Ricky, let's look at the photo above to see what is the difference between OSB and Plywood. Plywood is a series of sheets of wood that are shaved off of the tree and then glued together with the grain of each layer at 90 degrees to the grain of the sheet below it.

Less expensive panels can be made by talking chips of scrap wood, mixing them with a resin and extruding the whole thing into a sheet of what is called particle or chip board. This material is good for many things but not as durable, rigid or good at holding nails as plywood. So then the industry found a way to take the same chipboard materials, but force the chips of wood to line up in one direction, and then put them, layer after layer, in the same manner as plywood, each layer having the chips at 90 degrees to the last layer. The result of this process is known as Oriented Strand Board, or OSB.

OSB was good enough to qualify as a subfloor and was less expensive than plywood. OSB is good, but not as good as Plywood. It is not quite as sag resistant, more susceptible to swelling from water or even glues, and doesn't hold nails quite as well as plywood. So the direct answer to your question -- Plywood is better than OSB, and more expensive.

When 1/4 inch plywood is put over any floor it is either done to bridge over and smooth out low spots, or bypass a glue incompatibility problem. It does not add much strength nor much nail or staple holding power. Sometimes a floor installer will require plywood rather than OSB simply because he needs to guarantee his job and he has experience with plywood and OSB is unproven to him.