Comparing the Worm Saw and the Circular Saw. 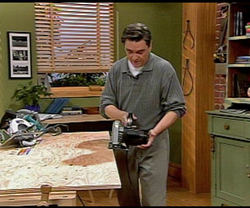 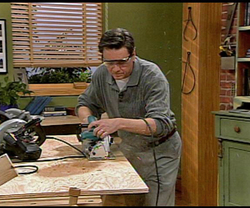 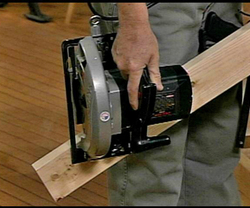 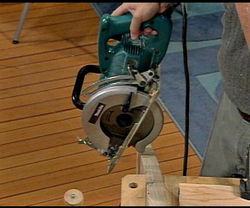 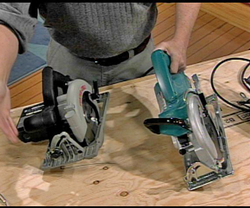 For years the standard framing saw has been a big heavy powerful thing called a Worm Saw. The name originally came from a special Worm Gear that gave it the shape (the motor back in line with the handle) and its great power. Today the worm gear has been modified to what is called a "Hypoid Gear", but we still call the tool a "worm saw" out of habit. (Just to complete the story, a regular saw has Helical Gears.)

One of the unique features of the Worm Saw is that the blade is on the opposite side from that of a standard circular saw. This is actually quite useful if you want to walk alongside a piece of plywood and cut a few inches off the edge. Being right handed and working with a regular saw, very little of the shoe will be sitting on the stable side of the cut. With the worm saw the weight of the saw is sitting over on the stable part of the plywood, not the little piece about to fall off. It is often said that you cannot bind a worm saw when you cut a long piece, this is probably less from its geometry and more to do with the great torque developed by that Hypoid Gear.

A regular circular saw has traditionally had the handle quite high because most of the work was done while standing over the wood to be cut. This makes it very awkward when trying to trim rafters from above, a standard framers task. The worm saw, with its handle way low in the back allows you to simply drop the saw downward while it cuts through those rafters.

Both the geometry and the power of the saw have made this a standard saw for every framer. But recently the saw companies have come out with regular light weight (less powerful) circular saws with the handles down lower, and even the blades on the opposite side. These may begin to compete with the worm saw, and will certainly make any left handed woodworkers happy. The saws on the show came from Makita.