How to check if your furnace oil tank is safe

Many years ago we buried oil tanks in the ground. Think a minute about how bad an idea that was. When a very old tank developed a leak, we never knew about it and it just leaked oil into the ground for years, creating quite an environmental problem. That is why it is no longer legal to bury residential oil tanks. So then they either went on the outside of the house, or in the basement. But the outside looked bad and was subject to mechanical abuse as well as early rusting, as you can see in the photo. 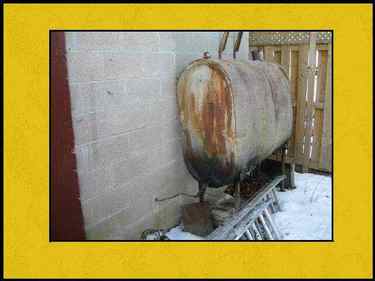 Oil tanks just sitting in the corner of the basement also leaked and that oil went into the concrete and into the soil below as well. In fact because of the high costs of removing concrete and digging out polluted soil, insurance companies now put various special restrictions on oil tanks, some simply won't insure tanks over a certain age, forcing you to change the tank even if it appears to be in perfect shape. In fact in most areas of Canada but not in Quebec, you have to have your tank inspected by the furnace service person, an inspection report filled out and a dated green OK tag put on your fill pipe outside. Without that tag, the oil delivery person will not deliver oil.  In Quebec there is no-one trained to inspect tanks and no green tag on the inlet for the fuel supplier. The new furnace installer himself must assure that the tank is worthy of connecting a furnace to it.

So just what should you look for when inspecting an oil tank yourself? 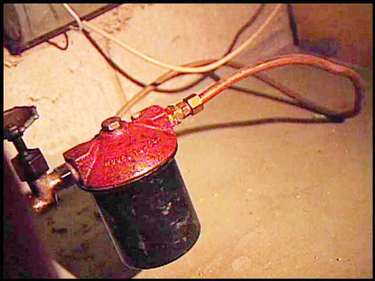 Follow the copper pipe all the way from the tank to the furnace. Check all joints for leaks and inspect the pipe to be sure that nothing has bumped into it to cause a fitting to leak, or crimp the pipe, itself. Make sure there is mechanical protection anyplace this pipe is exposed, particularly where it is can potentially be stepped on. 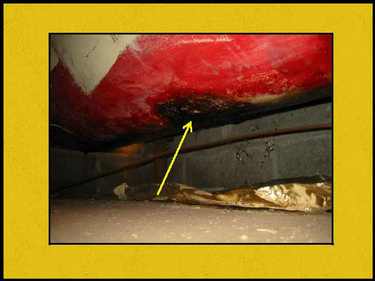 The strangest, but most common problem with oil tanks is when they 'rust' through from the inside out. Run your hand all over the bottom of the tank, looking for little dime sized blisters in the paint. If you find one or more, they are a result of sludge accumulating in a little clump inside the tank. That clump of foreign matter causes an electrolytic reaction that can eat through the tank from the inside out, despite all that oil. You wouldn't dream that an tank filled with oil could possibly 'rust' from the inside out, but that is what kills most tanks. When you do find those blisters, it is time to change the tank because it has already eaten most of the way through the tank wall.

It is possible today to find a plastic tray to place under the tank, even one with a built in alarm. This will catch any spills, prevent a problem of oil soaked concrete, and even alert you to the problem. Ask whoever is supplying a new tank for you to include a catch basin.

For the worst of the disaster stories: it does occasionally happen that someone changes their oil furnace for a gas furnace, totally removes the oil tank but does not suppress the fill valve outdoors. Yes it has happened that the delivery person just sat there filling the basement with oil until they decided that they put in much more than one tank of oil. If that green tag was still there, you couldn't even blame the oil company.