OVERVIEW:Improper exhaust fans can pollute your home -- could even kill you

More and more people are asking for powerful kitchen range hoods or bathroom exhaust fans. The logic appears simple, increase the power of the exhaust fan and get rid of pollutants quicker. In more and more modern homes which have been weather-stripped and sealed against cold air leaks and heat losses, powerful exhaust fans can do just the opposite of what they are intended to do. A 2002 report from the National Research Council of Canada, the Canada Mortgage and Housing Corporation and the University of Minnesota said right on its report title: 'Its time to sound the alarm regarding high capacity exhaust devices'. Too many consumers, even contractors, are totally unaware of the extreme dangers related to exhaust fans. What was common practice 20 years ago, can be deadly today. To download the full research report as a PDF file, click Proceedings: Indoor Air 2002.

The reality is that any air that goes out an exhaust fan has to come into the house someplace. In grandpa's drafty old house, that air simply filtered through hundreds of cracks in the walls. In today's more energy efficient houses, the only easy entry path might be one of the chimneys. Competition between exhaust devices and chimneys is obvious to anyone who has a wood burning fireplace or stove. A common practice is to open the window until the fire gets started, allowing the wood fire chimney a chance to compete with exhaust fans or even with the hot air that flows towards the top of the house. Once the draft is strong, the chimney on the wood burning appliance wins the tug-a-war. Even this can cause back drafting in the furnace chimney. 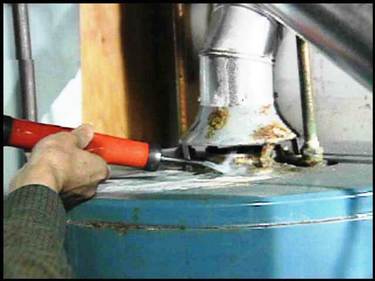 In this TV episode we went to an old duplex in Toronto, housing that is not known for its air tightness, and we tested the battle between exhaust fans and the hot water tank chimney. We chose to test the hot water tank chimney for a number of reasons. First it does not burn as hot as a furnace does, so it has a weaker draft and is more susceptible to back drafting. Secondly, many people upgrade their furnaces to avoid these problems but retain a regular hot water tank and its chimney. 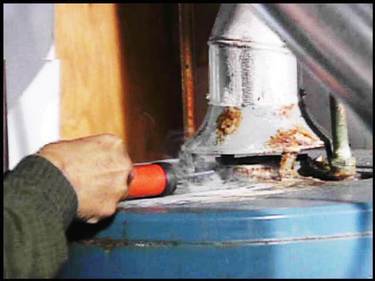 In the first two photos you see a smoke pencil that is used to see air movement. The first photo shows that smoke will normally go up the chimney, just because warm air rises. When we turned on the existing old kitchen exhaust fan, the bathroom exhaust fan and the clothes dryer all at the same time, it didn't change much, no back drafting. Then we put a test fan in the front door which can simulate just about any small or large exhaust fan and tell us how much air is moving. At 400 cfm the smoke pencil showed that the air was flowing down the chimney because of that fan. If the three fans in this house were not so old and were working at the 150 cfm that is common for these fans (3 x 150 = 450 cfm), the cold chimney would be flowing backwards. This would certainly cause at least a little, if not a lot, of the exhaust gases to flow into the basement when the hot water tank went on.

AT 900 CFM WE REVERSED THE HOT WATER TANK CHIMNEY

Then we did a tougher test turning on the hot water tank and allowing the chimney to get hot -- hence establishing a good strong draft. With the blower door test fan we managed to completely reverse the flow of that chimney at 900 cfm, the size of strong but common off-the-shelf kitchen exhaust fans. Many new kitchen range hoods even advertise as much as 1,500 cfm -- almost guaranteed to fill your basement with dangerous gasses. All of this was in a renovated but old house that did not have a lot of modern air sealing done to the walls.

FAN MANUFACTURERS ARE NOT BEING RESPONSIBLE -- NO WARNINGS

How can we have exhaust fans, combustion appliances and safety as well? One of our problems in answering that question is that the manufacturers of heating devices are not talking with the manufacturers of exhaust devices to try and deal with this problem. Each say it is the other's problem -- and the homeowner is caught with the pollution between the two. So the very first thing for a homeowner to do is to be sure that you have CO detectors in your home if you have any combustion appliance of any kind.

There are probably four tactics for preventing back drafting. 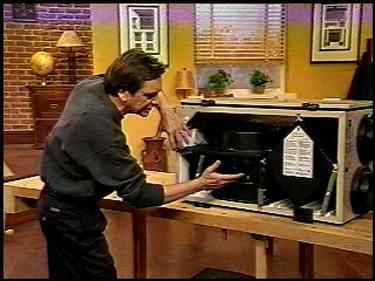 1- Use balanced ventilation. An HRV as seen in the photo is a fan system that brings in the same amount of air that it takes out. This means that the exhaust fan does not try to draw its air in by way of the chimney. This is the standard for good energy efficient housing. 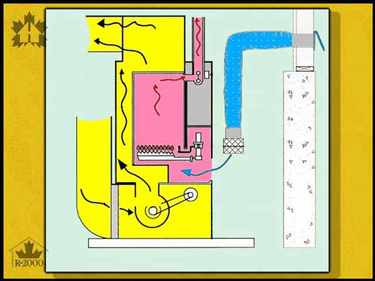 2- Provide a dedicated combustion air supply to the furnace room as shown in the photo. This provides the chimney with an easy access to outdoor air and works for most ordinary exhaust fans although very powerful exhaust fans can defeat this tactic. This is required in many building codes but not always installed properly. Hoyme Dampers help to make this duct work better. 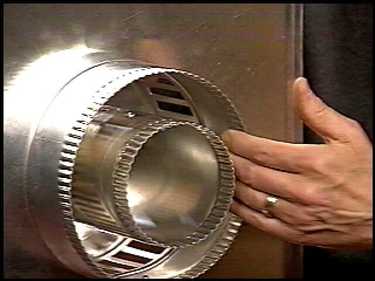 3- Sealed combustion appliances don't use household air at all. The photo shows a double duct used for a sealed gas fireplace. Outdoor air comes in through the outer part of the duct while the exhaust gasses go out through the inner duct. Exhaust fans in the house have no effect on how this appliance will burn. High efficiency furnaces work in the same manner, bringing in combustion air from outdoors directly into the furnace and then removing so much of the heat that the exhaust gasses are send outdoors by way of a plastic pipe, not a chimney. Some people think they have eliminated the possibility of back drafting by purchasing a sealed combustion furnace but if they have kept their ordinary gas hot water tank, they still have a chimney that can be back drafted by an exhaust fan. A high efficiency hot water tank or an electric hot water tank would complete the job. No chimney means no problem with any exhaust fan.

4- Interlocks are another type of solution, although they are only being developed very slowly for the moment, because this requires some coordination between fan, furnace and hot water tank manufacturers -- a cooperation that is hard to come by. An interlock would be a device that would detect when a large fan was turned on and then it would either turn on another fan to bring air into the house, or it would shut down any combustion device until the exhaust fan was turned off. In my opinion, interlocks will become the primary solution for renovation situations where HRV's or sealed combustion appliances do not exist.

The EnerGuide for Houses program in Canada does pressure testing like we did as part of their house evaluations; in fact Kai does evaluations through the group Green Communities. To find out more about this program and to locate someone in your community who would test your house, look up EnerGuide for Houses at the Natural Resources Canada web site: www.NRCan.gc.ca .