In this 2004 HGTV episode, we collected several different viewer questions about supporting outdoor structures so we could compare one to the other.  At the bottom of this article I have added, in 2015, the Helix screw piles that may just have replaced all the rest. 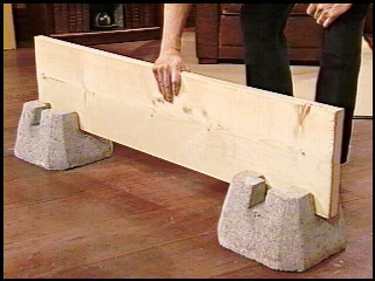 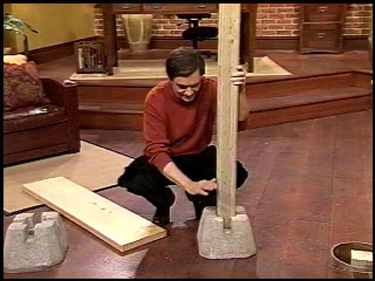 The first viewer lives in the mild climate of the lower mainland of British Columbia and wants to support a new deck by putting concrete pyramids over an existing asphalt driveway. In the first two photos , you can see the two basic ways pyramid blocks are used as footings, either holding beams horizontally or supporting 4x4's vertically. If you live in an area subject to frost and you have clay soil, these pads tend to lift up in the winter and come back down in the spring or lift more each winter. They do not make a stable base when you combine freezing temperatures and clay soil. In the portions of BC that have very little frost, they could work. But there is still a problem on an asphalt pad, especially if the summers get hot. Their constant heavy pressure can cause them to sink into the asphalt. Generally, pyramid pads are not good for any permanent structures, because they move up and down so much, especially when they are structures attached to a house where the movement will be more obvious.  A free standing Gizebo in the back yard would be a good canditate for elephant feet. 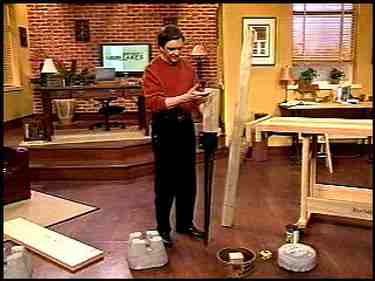 George, from Ontario, has freezing temperatures and clay soil and he is complaining that the support spikes used to hold up his deck are twisting and shifting each spring. You can see a support spike to the right. Support spikes are the easiest of all fence and deck products to install, unless you have a rocky soil, because you simply pound them into the ground. But support spikes have very poor sideways support and will continue to sink if your deck has activities on it, such as dancing, and they shift upwards with frost if you have a stop plate at ground level. I have never found any really good uses for these devices and have heard lots of complaints like George's. 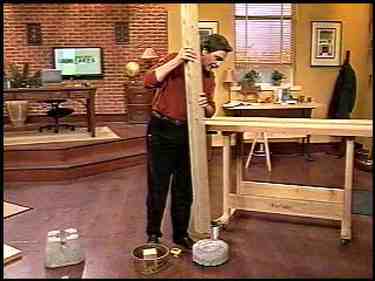 In thais photo you see my favourite deck support (in 2004).  3 inches of concrete is poured into the bottom of a hole reaching deep below the local frost level, and left to dry without a post. The 4x4 is then set on this dry concrete footing. The deck is built and the hole is filled in after the structure is finished. This makes a footing that will not allow the 4x4 to drop any deeper by pile-driving dancing parties on the deck, will not be subject to frost, and does not lock the 4x4 into a position that is always one inch off of what I need to line up the structure. If the 4x4 doesn't sit perfectly centred on the concrete; no problem. If the 4x4 twists as it dries; no problem, because the bottom twists, not the top. And you rarely need a Sono tube full of concrete anyway.

When you build a fence, corners are strong because they are supported by the fence stringers at a right angle to each other, so why pay for concrete? Long fences may need some concrete towards the centre post and gates may need concrete because of all the sideways forces on them. Very high decks may need concrete if there are horizontal forces on the deck, but most decks need no concrete except for footings. 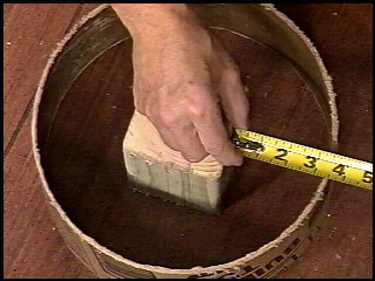 If you are pouring Sono tubes full of concrete, what size tube should you use? There should be as much concrete on each side as the thickness of the post itself, hence 4x4's go into 10 inch Sono tubes, and 6x6's into 12 inch Sono tubes, or you use hardware that keeps the wood totally above the concrete -- solid concrete with saddle hardware above the soil level to attach the 4x4 or 6x6 is today the norm for sono-tube work to keep the wood post high and dry out of the ground.  Technically you should have a wide footing at the bottom, but that is only feasable to accomplish by serious digging as is often done with a back-hoe in new construction.  Follow this link for informaiton of Sono tube saddles. 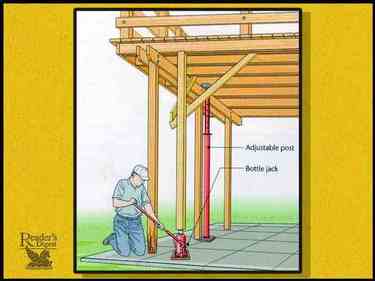 This graphic is to answer a question from Blair in Trenton, Ontario, who has a sun porch that has been lifted 7 inches by frost. You can rent house jacks that can easily lift the weight of a deck or sun porch off of the supports, allowing you to remove any excess or repair rot. In Blair's case, he needs to check out the landscaping to get standing water away from those posts to prevent future frost heaving .

Somewhere around 2010 we started to see more use of screw drive pillars, often called Helix screws.  In 2020 they are very common.  The basic concept is that the screw blade that you see on the bottom of this steel shaft is in fact a screw, which will allow placing this base very deep without disturbing the soil much on the way down.   The installer can measure the resistance to drilling that tells him when he has arrived at a solid footing. 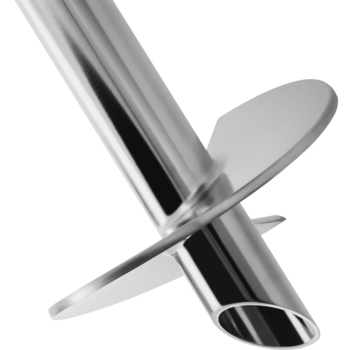 Then the very wide screw blade now remains there as the footing for the steel column.  Of course there are charts and graphs used to determine just how heavy is the structure above -- ranging from a simple wooden deck to a two story house and even more.  With the load to be supported determined, the number of screw foundations required can be calculated.

What happens when they hit a rock?  Sometimes they simply have to move over and modify the plan, but it is facinating to watch the operator change the angle, slide around a reasonable sized obstruction rock and keep going down almost dead on where he wanted the post in the first place.   Nothing can be quicker and cleaner.

In extreme climates it is possible for this hollow post to carry the chill down to the footing, allowing some freezing action under the screw footing.  PosTec Screw Piles is one company that has developed an insulated upper section to prevent that.

So why is it that for many applicaitons, the screw pile is the way to go?

First is speed and ease of installation.  The piles are more expensive that concrete but not the job as the entire job is completed in an afternoon without hauling or mixing any concrete.

Second is its resistenct to frost heaving.  I mentioned frost heaving above and what we are talking about here are specifically ice lenses.  In a heavy clay soil, frost goes into the ground in jumps.  It goes down a few inches, gathers the water into a horizontal lens of ice, then the freezing goes on down, making lens bump after lens bump, each of them a bit larger than the water in the clay they came from -- which means they rise up in the soil.  The problem comes when they stick to the side of a fence post, or a deck concrete pillar, they can lift the house right up.  Screw piles don't have any problem with freezing clay.

In new construction where there is heavy equipment to dig out the basement, it is often easier to just dig a ditch along the whole run of deck or porch supports, use Sono Tubes and concrete because the concrete truck is comming anyway.  Then they back-fill around the supports when they are back-filling the foundation.

When is cross bracing required?

One more detail -- any deck foundation that attaches to the wood above the soil has a bending point where it attaches.  That is a weak point in the structure and requires diagonal cross bracing against wind forces.  The old 4x4s or 6x6s that started five feet in the ground and ran right up to the top of the deck rail never bent in the wind.  So any of these foundations that hold the posts above the ground must have diagonal cross bracing -- the taller the posts, the larger the cross bracing.