A window that is warmer than the insulated wall 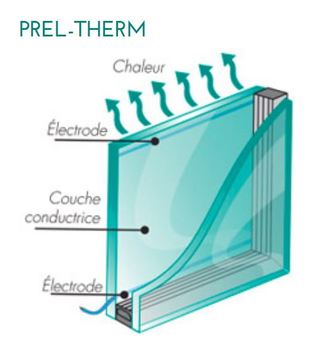 I have always said that as far as the cold getting into your house is concerned, a window is always the coldest part of a wall. But no longer. A company called Prelco from Riviere-du-loup, Quebec has produced a window called Prel-Therm that actually plugs into your electrical system. That's right, a 120 volt window. 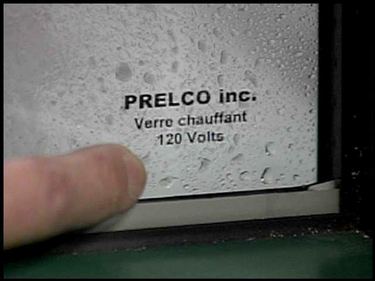 They have a transparent heating element put onto the glass just like the Low-E films. Now most people outside of Quebec consider heating with electricity too expensive and this is probably not the most efficient heater made, but just about every house could profit from having one or two windows that could actually be heated. For instance, a window in a bathroom or near a sauna that is constantly covered with condensation, even frost. Heat it up and that window would stay clear despite the highest humidity, and not drip water onto the frame. The window in the photo above shows moisture drops on it, but that is because we have a big block of dry ice right on the other side to make it cold in the TV studio. How about that one window right next to your office or reading chair where you do want to be close to the window, but the chill just drives you away. They run on their own thermostat so you can set it just to take the chill off or just to avoid condensation or higher to actually be a heat source for the room.

These window panes can be custom made to any size and sold to any window manufacturer, so you could solve that existing window problem, or pre-empt an anticipated problem with new windows by insisting on particular windows being wired for heat.  You don't have to turn them on until moisture conditions require it.