Topics : Metal topping as an alternative to an asphalt ...

Topics : Where is the water coming from that is backing...

Topics : How to check for mould in the floor under a sl...

Evert from Brownsburg, Quebec has the problem of a sewer odour in his bathroom but isn't sure where it is coming from and whether or not he needs to change his toilet.

It can in fact be difficult to localize the source of sewage odours and hence which fixture or drain is guilty. 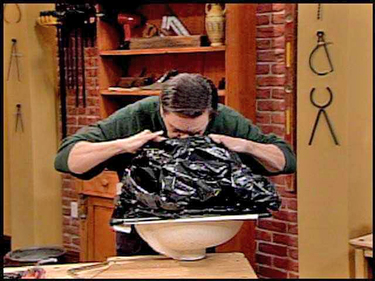 One technique is to thoroughly air out the bathroom to clear out the odours and then tape a garbage bag over the sink or the drain of the tub or a floor drain, or all of them. Leave them for several hours. Then one at a time, break open the sacks and stick your head in for a good smell. If there are no bad odours inside the bag, that fixture or drain is not guilty. This can often get you working on the right problem quickly.

If none of the fixtures are guilty but the odour is in the bathroom itself, now you need to think about a possible problem with the plumbing vent system inside the walls, but at least you have carefully ruled out all the drains before opening any walls.

Is the odour inside the walls?

If you want to check for musty smells possibly coming from inside walls you can use a similar technique.  Take the garbage bag and tape it to the wall around an electrical outlet with painters masking tape (so as to not damage the paint when you remove the tape).  The bag should be bunched up rather flat against the wall.

Now open a window to air out the bathroom and take a walk around the block to clear you nose of the odour you are searching for.  Immediately upon entering the house (so your nose doesn't get used to the odour) pull the garbage bag away from the wall without pulling off the tape.  This should fill the bag with air that is drawn in from the wall through the electrical outlet.  Remove the tape and smell what is inside the bag.  You will instantly know if the musty smell is coming from inside the wall or not.  Of course if that outlet is installed in one of the air tight boxes, no air will fill the garbage bag -- but air tight electrical outlets are not used on inside walls, and not a lot of them were used on outside walls either.