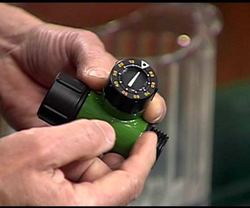 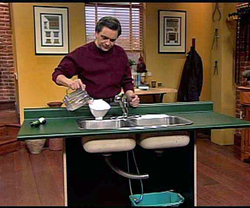 I remember when low flow shower heads were first introduced they made a lot of noise and gave lousy showers. They certainly have come a long way and have become the standard shower today.

One very important step in water conservation is simply to become aware of how much water we use. The first photo shows the Water Watch meter. This is a simple little device that goes on the garden hose and a little dial tells you how many litres or gallons you have used since the last time you re-set the dial. Another version is specifically made to go between the plumbing and the shower head. In my family this has lead to competition to see who uses how much water in a shower. It was amazing to see that in the case of a shower some people use twice as much water as others and, the simple use of a shut-off valve while you are soaping up can cut your water use in half. I was a bit surprised to see how a bit of awareness even caused me to reduce my own water use.

In the land of flowers and gardens of Vancouver, a Canadian inventor invented the simple little funnel you see in that second photo called the EnviroSink. This is a specially shaped funnel that you can install in that extra sink hole. It simply runs through a tube to an outdoor cistern in warm Vancouver, or into a basement cistern for colder parts of the country. This water is then used to water the garden. What waste water is diverted from the drain to the garden? How about all that water that is wasted while you are running the tap waiting for the water to get hot? The funnel is placed so that you can swing the kitchen sink faucet over to flow directly. Any extra water in pitchers or cooking water, anything that could be used in the garden can be diverted away from the drain.

How about a lawn sprinkler that uses less water because it puts out larger droplets of water, hence less evaporation!