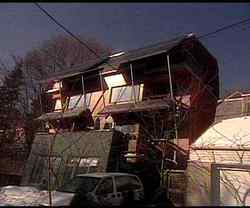 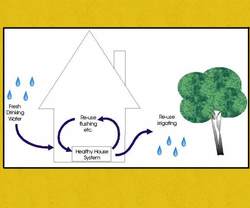 How about a house in the middle of Toronto that gets its water from the sky, not from a city water connection, not even a well. Then it gets rid of the waste water into the garden, not a connection to the city, not even a leaching field. Although it may be considered by many to be an experimental house, an active family lives here. It is called the Healthy House System and is serving as a proving ground and demonstration house for the minimum water use / maximum water re-use kind of housing that is actually being built in areas of extreme water shortage, such as in the far north and in desert regions and may become common anywhere water conservation is taken seriously. Rolf Paloheimo from Creative Communications Research Inc. in Toronto is the man who is taking water conservation to the limit only seen in the Dune science fiction movies before this.

A large underground cistern collects rainwater from the roof and stores enough to carry the house through almost all periods of lack of rain. Rarely does Rolf truck in any water.

Then it goes through a slow sand and bacteria filter, a first step that Rolf calls good old fashioned technology.

Then it is disinfected with ozone and flows onto a storage tank for the household sink taps providing drinking water. So now we have clean potable water -- all from the sky. Many people are surprised as to how little potable water we actually need in a house, water that is only used for drinking and cooking.

The sink drains flow to a septic tank. The septic tank flows through a bio-filter which is like a compact leaching filed -- right in a tank in the basement. This concentrates biological activity that literally cleans the water. The water then flows through a disinfectant ozone filter to another storage tank which supplies the other taps in the house: the shower, the tub, the toilets, the washing machines. This is clean water, but not considered drinking water.

Here is the real catch: all this water goes back down the drains, back into the same septic tank. The water actually loops around the house 5 or 6 times before being ejected. It is only the fresh drinking water coming into the system on one end that forces the old water out the other end towards the garden. Think about this -- no more water goes into the garden than the rain that falls on the roof.

If we think about how little water we use for drinking and cooking, we can see how the rainfall can easily provide that need. All the water intensive activities in this house, like toilet flushing and cleaning, are using no new water.

Rolf has developed an international business in making water starved homes function like space stations. Think about it for a moment. Almost all our water conservation efforts are aimed at reducing our use of water in order to be sure that the limited supply can meet the demand. Rolf is proving that much of our water use doesn't even need to be in the supply side part of the equation when you take all flushing and cleaning activities and satisfy them with re-use. Overall water consumption is reduced by 90% compared to the neighbour's houses. This is not a marginal reduction.