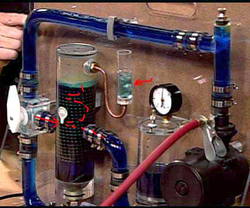 When air gets into hot water radiators, either from new water in the system or even from problems with seals, it can make noise and reduce the heating effectiveness of the system. That running water noise is actually caused by a big air bubble at the top of a radiator and the water falls through the bubble to crash noisily down to the bottom of the air bubble. Eliminate the air and you eliminate the noise. A radiator that is full of air may have no water movement through it, or at least where there is air, there is not much heat transfer from the water, hence a cooler radiator.

Here is the traditional technique for trying to control the air. Turn off the circulation pump. Let the water settle a few minutes to allow the air to settle up to the top of each radiator. Then bleed the lowest radiator in the house up to the highest. You should do this at the beginning of each heating season, and any time you either don't have much heat or you hear a lot of gurgling water noises. Auto purging valves can be used, ranging from 10 to 30 dollars each. The cheap ones don't work well or clog up. The more expensive use a floater principle to let the air out the tip but you need one on each radiator.

Then there is the Spiro Vent. In the photo you see a transparent model of a Spiro Vent -- that thing in the middle with the screen inside. This is a plumber installed device now sized for residential use after years of good performance in commercial applications.

The Spiro Vent uses an auto purging floater valve placed in the highest radiator in the house, several if the piping arrangement makes for several high points in the system, but you don't need one for each radiator. Then there is the special spiral purging valve placed right after the circulation pump near the boiler. This device has a patented spiral screen that the water must flow through. That screen breaks up the air bubbles into micro-bubbles that float up to the release valve rather than travelling on through the system. Even dirt will float to the bottom of this valve allowing you to flush it out occasionally. Rather than trapping air at the top after it is already a big problem, this system continuously cleans the air out of the system. The flow rate of water through the Spiro Vent is critical, hence the need for a plumber to size and install one to match your system. That is why it is not available as a DIY item.

When you first install a Spiro Vent you will notice air coming out the vent for a long time as it slowly pulls the air out of the water, allowing the water to dissolve all the little pockets of air throughout the system. Once it has eliminated all the pockets, it will seem to be doing very little -- but what it is doing is removing the small quantity of air as it enters the system, not allowing it to accumulate into air pockets anywhere.

Spiro Vents are available for small boilers, for large condo units and even big industrial heating plants. They really work and are definitely the best answer for improving hot water heating systems. Your plumber knows about it, you just have to ask for it. This is something to definately raise at the next condo association meeting.-