Whether you are trying to get rid of smoke odours caused by fire or cigarettes, mold infestation, incrusted pet odours, the aftermath of a contagious disease (used to sterilize ambulances) or just preparing an apartment for rent that smells bad - read on. 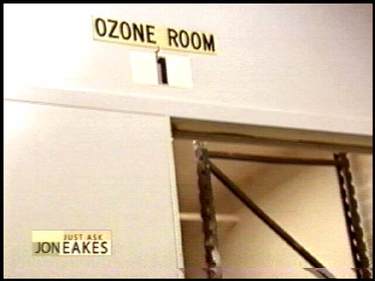 This article was first created in 2004 after we visited a Toronto Disaster Restoration company that specialized in cleaning up contaminated stuff that would otherwise just be thrown away.  They used heavy OZONE concentrations for some things and ULTRASOUND cleaning tanks for others with amazing results.  But Ozone is dangerous corrosive stuff that should only be handled by professionals. Today, in 2017, I am adding an update to this information in that the industry is slowly changing over from Ozone to Hydroxyl.  The professional procedures are the same but the difference is important in that Hydroxyl is safer for workmen, more effective on more problems, including contagious viruses, but works slower.  Still not a DIY project, it can solve problems that would otherwise linger forever. 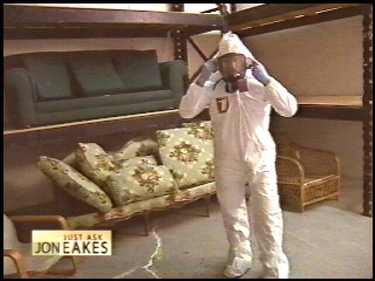 2004 -- Mike from London, Ontario moved into a home previously owned by smokers and just can't clean it up enough. How can he get rid of the odours? You may be aware that there are companies who specialize in cleaning up houses and objects in the house after floods and fires. Well, removing the smoke from a fire, or the smoke from years of cigarette smoke is about the same task.

GET OFF THE SURFICE GRIME

For the smoke itself you first want to clean off any soot and grime, so for Mike that means cleaning everything thoroughly, as he has already done.

CLEARING OUT THE ODOURS

Then the best treatments for smoke smells is Ozone or the newer Hydroxyl -- but there is a warning. Health Canada has spoken out against all domestic Ozone machines because ozone is very caustic and dangerous to your health. Here you want to call in the professionals -- people who take care of disaster restoration. 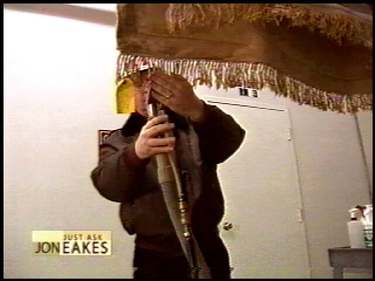 Jamie Young from TGA & Son Contracting & Restoration in North York, Ontario joined me on my HGTV show and walked us through the approach to recuperating your house and its belongings from a disaster, or years of smokers.  In Montreal there are some industrial ozone chambers available but it wasn't until 2013 that SteriMobile started serving houses, cars, hotels and gym locker rooms in removing odours with ozone.  This service works and is often done in conjunction with other clean-up renovation work.  Also in Montreal, Renovco Renovation et Restauration après Sinistre combine restoration, decontamination and full renovation services and offer both Ozone and Hydroxyl services in your house or for your belongings in their warehouse decontamination chambers.  Across the country look up "disaster", "flood" or “decontamination” services in the yellow pages. 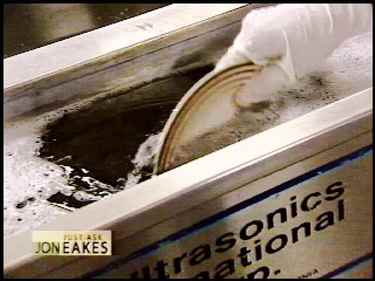 ACT BEFORE THE MOULD SETS IN

Most important is to move quickly, especially where water is involved so as to restore material before any mould can set in as the mould doesn't only dirty materials, it eats it.

For removing smoke odours, start by removing the source. For what is not damaged by fire, cleaning is the most cost effective method.  For removing a mouldy smell, check my entry About Cleaning Up Mould.  Then if the odour lingers, or is stuck in every cranny of the house like for Mike in London, you will need the heavy artillery – Hydroxyl or Ozone treatment.

For objects like sofas, chairs and valuable rugs, these can be taken to special decontamination chambers. Just to point out the health concerns when working with ozone, I wanted to include a photo of the technician getting ready to turn on the ozone machine! This can be done in your home to the house itself, but you, all your pets and plants will be asked to leave for at least a day to make sure you are not exposed to excessive ozone. Just as it can destroy odours, it can destroy just about any living thing -- that's why there are no safe DIY Ozone machines. By the way, ozone and hydroxyl works to deodorize the interiors of cars and boats as well and that is what they use these machines in hotels when someone smokes in a non-smoking room. 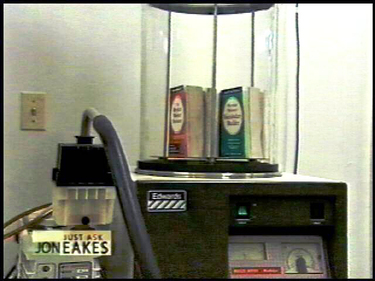 Disaster restoration cleaning can be as low tech as the standard cleaning of a carpet, or as high tech as using high frequency shock waves in soapy water to get that smoke stench off of solid objects like dishes. New technologies that use freeze drying can even recuperate valuable water soaked paper documents that previously would have had to have been thrown away.

When mould is buried deep inside walls, like after a dirty flood of a finished basement, you will probably have to rip into walls to dry things out and get to all the mould.