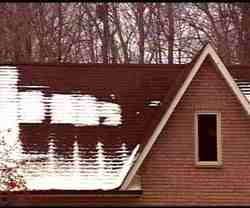 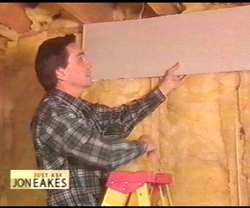 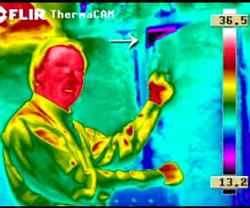 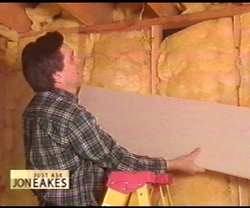 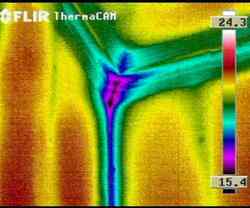 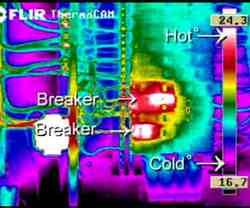 There are several non-destructive ways that we can see what is going on inside the walls, ceilings and roofs of our homes. Simply watching the melting patterns of a light snow on the roof will tell you where you have insulation and where you have heat losses. In the first photo this was an unheated garage that was converted into a heated space. My doctor's diagnosis of this house, without even going inside is that they converted that attic into a heated space, insulated the small cathedral part of the attic where you see the patches of snow sticking, but have serious warm air leakage into both the lower and higher roof spaces which is melting off all the snow. In fact, the roof joists themselves, that you can see as snow lines, are the only insulation in this area. The overhang is not warm, hence the snow is still there. Very often you will see melted spots on a fully snow covered roof that are just above recessed light fixtures or large melted patches above a plumbing stack who's passage way is allowing warm air to flow unrestricted from the basement into the attic.

We visited Brian Jastrow of IRIS Thermography in Mississauga, Ontario to see an even more scientific way of finding construction faults by reading heat patterns. The second photo shows what we usually see on an inside wall, simply covered with drywall. The third photo shows a cold spot in that wall just above my hand and when we remove the drywall, there is in fact a gap caused by poorly placed or missing insulation. The Infra-Red camera gives a colour scale where the reddish areas are warmer and the bluish are cooler. In fact a specific colour represents a specific temperature and you can actually measure temperature with these cameras. The scale on the right tells you the hottest and coldest temperatures on this particular photo, in Celsius. The next photo shows the outside corner of a stairwell. In the middle of the fiberglass batts, it is quite warm. Where the studs are located, it is cooler because of what we call thermal bridging -- the cold comes right through the wall following the wood which is less of an insulator than the fiberglass. In the corner itself it is almost freezing, indicating a lot of heat loss, perhaps a lack of insulation in the corner itself, or cold air drafts coming in through the structure of the wall. Follow this link to see how to cure this problem with foam insulation. If you take the same photo in a house that has rigid foam insulation on the outside covering all the studs, you would get a much more even heat pattern. This camera can be used to study air conditioning losses in the summer as well as heat losses in the winter. You see how my face is about the hottest thing in the photo -- these cameras were used at airports during the SARS outbreak to identify people with fevers without even going near them.

Brian's business of using infra-red cameras to study problems is not only limited to inspecting insulation in houses and commercial buildings. He can see the temperature of electrical wiring, even motors, to spot hot spots and future problems. White on the Infra-Red scale is very hot and in the electrical panel in the last photo the doorbell transformer is very hot, which is normal, but there are also two circuit breakers that are overheating. When checked out, the wires were loosely connected on these two active circuits and needed tightening.

Some people interested in energy conservation and avoiding condensation problems will have their house checked out with infra-red cameras -- before buying, before renovating or even during renovation or new construction to verify if the job was done right after the walls are closed up but before the contractor has been paid. The only requirement is that there has to be a temperature difference between the indoors and the outdoors, otherwise the wall is all the same temperature. The greater the temperature difference, the more the infra-red camera can let you see.