An alternative to ducting through the attic in a cold climate.

In my experience, heating ducts that run through attics cause serious problems in snow country. Don't let a contractor talk you into it.

In warm climates it is common practice to run heating and air conditioning ducting through attic spaces simply because it is easy to do. Unfortunately this practice is all too common in our Northern cold climate, putting air conditioning ducts in the hottest possible place in the house during the summer and putting heating ductwork through the coldest possible part of the house in the winter. Even running air exchanger or HRV ductwork through an attic causes all kinds of problems.

Problem number one -- the openings at the ceiling around ductwork is rarely properly sealed totally air tight.

Problem number three -- insulation levels over the ductwork is always far less than we carefully put over the ceiling -- again loosing energy into this hostile space.

And the biggest problem in a snow covered climate is that no matter what you do, these ducts will always warm up what is supposed to be a cold attic space in the winter, melting the bottom of the snow pack and causing Ice Dams. It is rare that I have seen furnace ductwork running through an attic that did not cause ice problems on the roof -- see my entry on Ice Dams.

If you do have ducting in an attic: seal ceiling penetrations, seal all boxes and joints air tight, insulate like crazy and pray a lot.  Unfortunately spraying polyurethane foam over heating ducts is not permitted by the building codes, although many people do it out of necessity.  See my article about Sealing ductwork in an Attic. 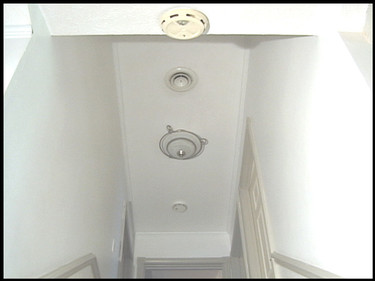 So people ask me: how do you run ducts of any kind in a complicated house without using the attic space?

This first photo shows the hallway above a stairway, the ceiling being just below the attic. 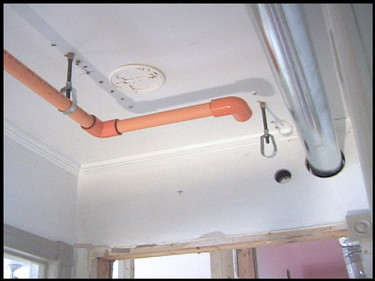 The second photo shows running HRV ducting and even residential sprinkler piping on the warm side of the ceiling. This gives us access to every room on that floor through side walls, giving the same results as running this stuff through the attic while leaving it all on the warm inside of the house with no penetrations at all into the attic. By the way, in a cold climate sprinkler pipes must be run on the warm side of the attic: either inside the top of partition walls, or through a bulkhead or a dropped ceiling like this one.  Of course my wife wanted to shoot me when she walked in and saw all this junk on the ceiling. 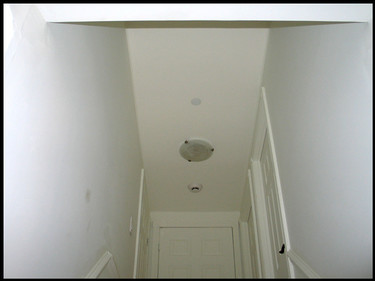 The third photo shows the same hallway after it was drywalled 7 inches lower than the original ceiling. If I hadn't told you to look carefully you would have probably said that the first and the last photo were the same. The reality is that even with a lower ceiling in a hallway, no-one notices. You pass through a hallway, you don't sit there and contemplate the ceiling height, and the door headers hide the difference between the room heights and the hallway height.  At first sight my wife thought I had listened to her and pulled all those pipes out.  I had to have her stand in a doorway and look up into the room and the hallway to realize that the hallway was over 6 inches lower.  I won that one.