Topics: A polished granite slab balcony is too slippery... 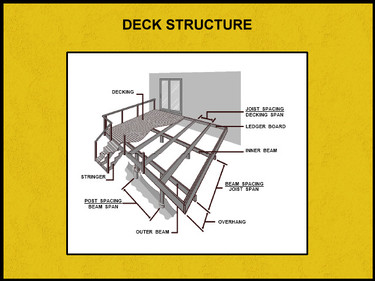 Decks need to be built strong enough to not fall down or have deck boards break for lack of support. In addition, although they do not need to be as solid as a floor in the house, they should not bounce like a trampoline. The structures of most decks in Canada are built with pressure treated wood made from Canadian lumber. That is an important detail as US and Canadian lumber use different span tables because the wood itself is different. Also Canadian span tables are designed to withstand heavy snow loads. Span tables define the weakest limits permitted for various ways of assembling a deck. If you are planning on having heavy duty parties, or have a very low tolerance for wine jumping out of a glass when someone walks by on the deck, you should not built to the lower limits of these tables.

Generally speaking, if you can afford the vertical space, you can built a deck less expensively by stacking beams on top of posts, and joists on top of beams and then the decking on top of the joists. If vertical space is a problem, you can always have beams and joists that have less height but more thickness and even put joists on the same level as beams, but this generally requires more lumber. As an example, under certain circumstances a beam could be made out of one 2x10 or two 2x8s or three 2x6s -- they would all have the same strength. This kind of choice is listed in the span tables.

In the absence of any code documents for deck span tables in Canada, in 2008 I compiled my own span tables from many sources for decks made with Canadian lumber.  I had those ad hoc span tables here on my site for 8 years.  In 2016 the CWC finally published official prescriptive span tables for Canada and Canadian wood species (see below).  Although mine were basically right and much easier to read and use, I have withdrawn them to avoid any confusion with what is now the code accepted tables for Canada.

Finally in the Spring of 2016, the CWC published deck span tables and put them on the web for free in the form of a PDF. In 2019 they published Revision 1. This update includes a design example at the end of the document.   Click here to download the Prescriptive Residential Exterior Wood Deck Span Guide from the CWC.ca website.

My Excel calculator above is easier to use, but the CWC tables are far more accurate taking into account different wood species as well as the difference in strength of incised or non-incised wood.  So use my calculator to get an idea of what you want to do, and then go to the free CWC document to verify the details against the specific wood you have locally available before making your purchase.