Many electrical utilities across the country offer a "Dual Energy" rate program. Before trying to decide if it is appropriate for your house, you should understand why the utilities have created this system.  Click here to get the full picture on Hydro Quebec's residential electrical rates and subsidies.

Electrical utilities have to be able to supply all the electricity needed at their moments of highest demand, or what they call their "peaks". In areas like Quebec where electricity is used extensively for heating, the peak will be in January. In areas where most heating is done with gas, oil and propane, like Ontario, the electrical peaks will come with the air conditioning loads in August. The catch is that the entire system of production and distribution has to be build to handle that peak load, while most of the year is not getting maximum use out of its production and distribution infrastructure. The bottom line is that the cost of electricity has to include the cost of all that stuff when it is not being used.

If there was a way for the electrical utility to lower some of the electrical demand as the "peak" approached, they could actually do their job with a smaller less expensive system -- or in more realistic terms, not have to increase their size as rapidly as they are presently doing with no "peak" control.

So they did the math and the science and came up with what is called a Dual Rate system. Details vary across the country, but in Quebec, if you sign up for a Dual Energy rate, the utility will sell you electricity at a 40% discount most of the time. This means 40% off of your lighting bills, your cooking bills, your clothes dryers etc. and 40% off of your electrical heating bills. If your electrical heating is done with a heat pump, which is already about 1/3rd the cost of straight electrical heating, you are really getting a deal. Then in very cold weather they will charge you as much as 300% the going rate for electricity. The idea is they want to force you to use as little electricity as possible during their peak demand period -- so to qualify for this rate system you need to also have a heating system that runs on something other than electricity. In practice that means that your heat pump or electrical furnace or electrical boiler stops working when it reaches the utilities cold weather limit and your gas or oil furnace or boiler automatically kicks in to handle the heating during those coldest periods. At this moment a little light turns on in your kitchen to tell you that you are on the expensive rate, and you need to avoid drying clothes or running any major optional electrical devices. Actually that light doesn't go on very often and people who have this system tell me that it really isn't much of a bother to work around that light. Some rate systems may be even more advantageous in exchange for the ability of the utility to "drop" your heating load automatically from a distance forcing your system from electricity to your back-up furnace/boiler - which allows them to manage difficult demand periods even better.

This is all called "peak demand management" and it makes great sense for the utilities, so they price it so that it makes good sense to the homeowners.

The details – for those who want to look under the hood

Because Electrical utility bills are so complicated, many people think that the numbers I cited above are not right, or they think that Hydro is changing things with time.  So I recently sat down and did a 5 year analysis of Hydro Québec’s rate structure and changes.   One thing to note is that the base rates for the ordinary residential D rate and the special Dual Energy DT rate have changed very little over 5 years – about 4% over 5 years.  Most of the Hydro Quebec annual rate increases were applied to the portion of the bill relating to heating and air conditioning, which consumers can counter with energy conservation measures and better heating systems. 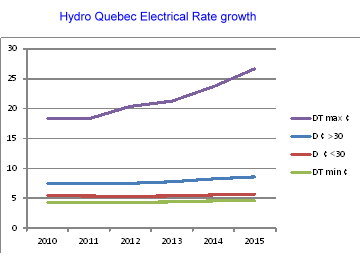 Let’s look at Hydro’s rates.  First understand that Hydro charges a small fee just to be connected to the grid.  Then they have a quite low cost base rate for the first 30 kWh/day of electricity used, just about the lowest in North America.  In a generalized way, this accounts for normal electrical use without using electricity for space heating.  In a time of the year when you don’t use either electrical heating or electrical air conditioning, you will rarely go over this 30kWh/day use, and you get their base rate.  But when you go over the first 30kWh/day, they have a second rate, that is about 30% more expensive – and this is what you are paying for most of your space heating and air conditioning.

The Dual Energy rate system has a minimum rate about 20% lower than the regular residential first 30kWh/day rate, making it the lowest rate available.  There is no kWh/day limit to using this rate as moving to the higher rate is based on outdoor temperature – either -12C or -20C, depending on the region.  Once you hit the low temperature limit, the electrical rate jumps way up, and your fuel fired furnace is programmed to take over, dropping your electrical use dramatically to help hydro with their peak demand.  What is confusing is that this rate has stayed pretty close to 3 times the higher regular residential rate, not 3 times higher than the low DT rate.  This actually makes sense since the higher regular residential or D rate is primarily aimed at heating and air conditioning usage and the special DT higher rate is pegged at 3 times the electricity normally used for heating.  It is a bit shocking when you see that in 2010 this rate was 18.32¢ and in 2015 26.69¢ -- but that is still about 3 times the second regular residential rate.

There is an interesting bonus for homeowners with all of this complexity, since the higher DT rate only comes into effect in extreme cold weather, all your air conditioning is priced at the lowest of all their residential rates; the low DT rate simply because it doesn’t get cold in the summer.

One interesting side effect of only using your furnace/boiler a few weeks of the year is that it will last longer -- so an old fuel fired heating system might be stretched out to several more years of service before replacing it.

Generally this is a good idea for anyone with a fuel fired heating system, but to be sure in your particular case, ask a heating company to come in and do the calculations: capital cost -- annual savings -- payback.

A new addition to this idea in 2013 is the creation of the Tri-Energy system.  It starts from a basic dual energy installation, adds a small plenum heater and a full system controller with the end result being an additional 50% savings with a 2 to 3 year payback.  That is squeezing every penny available out of the Dual Rate system.