Montreal is phasing out wood heating that pollutes

Note: There is one important exception to all the pollution control described below.  The Montreal by-law states: "Authorizing the use of all solid fuel-burning devices during electricity outages that last more than three hours."  (but you must keep your fireplace and chimney clean and in good condition to qualify for this exception.)

Surprisingly the Province of Québec provides good information in English relating to the pollution problems of wood heating. After some pressure from the English media, the Ville de Montréal has recently translated information on its new wood heating restrictions into English.  They do have a French website on all the regulations and public consultations.

I have modified this article over the last couple of years as this issue was debated.  Now, in 2016, the rules for the Island of Montréal are in effect.  In a nutshell:

Specifically from the Montreal web site:

The by-law is in force in all 19 boroughs and consists of: 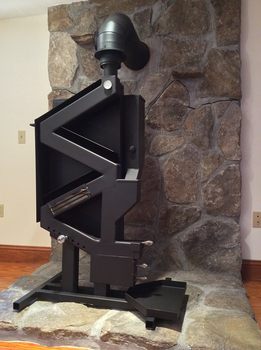 For the moment, the US regulation is 4.5 g/h – the Montreal regulation is 2.5 g/h as rated on the EPA and CSA lists (see hot links above).  There are over 150 solid fuel appliances, most pellet stoves but some catalytic burners that are rated below the 2.5 g/h limit – and would be legal for use in Montreal under the new regulations.

Pellet stoves are the most efficient but they have the serious limitation of requiring electricity to run the feed auger - so they are useless during a Hydro black-out.  EXCEPT for the WiseWay no moving parts gravity feed pellet stove, the only one of its kind, and it is certified by the EPA to produce 1.9 g/hour of fine particles, well under the Montreal requirement of 2.5 g/hour.  The US informational page is at WisewayPelletStove.com but Canadian sales are through web sales at Home Hardware (much cheaper).  Look up Wiseway Pellet Stove.

During winter smog warnings, no solid-fuel-appliances may be used. You can sign up for Environment Canada smog alerts via Twitter.

It is authorized to use solid fuel burning devices (of any type) during electricity outages that last for more than three hours.

Read-on for the history and reasoning behind this anti-pollution regulation.

The problem is well stated on the Québec website:

“Whether the smoke released comes from a woodstove, a fireplace or a campfire, it is not as “environmentally safe” as you might think. According to Environment Canada, a woodstove that is not certified emits as many fine particles into the air in nine hours as does a certified woodstove in 60 hours or a mid-size automobile traveling 18,000 km. (some critism says this quote is old and new cars perform much better, perhaps we should calculate a comparrison to a diesel truck) … In Québec, wood-fire home heating is responsible for half of the fine particle emissions associated with human activities.”  A 2009 study found that in winter, Montréal residential areas are far more polluted with fine particles than the downtown core with all its traffic, mostly due to wood heating.

Starting in 1988 the Environmental Protection Agency in the US began to regulate wood heating, requiring appliances that were more and more efficient.  Moving from unrated stoves that produced 15 to 30 grams of smoke per hour, they legislated 7.5g/h, then 4.5 g/h and today Montréal is proposing to follow the proposed Phase 3 regulations of the EPA  for no more than 1.3g/h (the final bi-law settled on a compromise of 2.5 g/h) of fine particle emissions with any new appliance installation. You can’t get that in an open fireplace or an old stove.  In fact about the only way to get such performance is with a modern pellet stove that has compact, clean dry wood pellets that are fed to the fire in a continuous controlled hot burn with multiple burning chambers or catalytic converters that burn what is still burnable in the smoke.  Follow this link to an old but still valid one minute animation showing you how the double burn works.

In 2009 the Ville de Montréal banned the NEW installation or replacement of any non-certified solid fuel appliance (appliance means stove, fireplace, furnace …) and only permitted the NEW installation of appliances fueled by gas, oil or wood pellets.  No more logs or scrap wood as fuel in NEW installations.  That regulation went into effect in April of 2009.  For all existing wood burning appliances, only burning virgin wood is permitted, meaning no lumber or other recycled wood which often is contaminated with paint, stains and other chemicals.  The quality of wood you burned was the only control put on old existing installations in 2009.

But the writing was on the wall.

The new regulation that has been adpated in 2015 has the following essential elements:

- All citizens must declare the existence of any wood fueled appliance as soon as the regulation enters into effect;

- Starting in 2015, immediately after the regulation enters into effect, the use of any solid combustion appliance of any kind, including pellet stoves, will be forbidden for the duration of any smog notices.

- All the pellet stoves that were installed prior to the adoption of the new bylaw may continue to be used without regard to their emission ratings.

- From December 31, 2020, you cannot operate any wood burning appliance that does not have a certificate proving that it is emitting less than 2.5g/h of particles, with an exception for those already installed pellet stoves mentioned above.  Replacement of old units is not manditory so you could wait for better economic times or for new models, but be aware that the use of polluting wood appliances is usually visible from the street -- high effeciency models have hot air but no smoke coming out of the chimney.  It is a bit like owning an old car that is not street legal, you can own it, but not drive it.

- As an exception, use of a solid fuel appliance will be permitted during any electrical outage that lasts longer than 3 hours -- although for fire considerations they must be maintained in good condition; chimney sweeping etc. (Apparently meaning that those of you who hoard some logs and board up that old fireplace, could legally burn that wood during the 2025 ice storm.)

Consistent with this effort to cut down on fine particle pollution, the province of Québec has banned the manufacture, sale or distribution of any wood heating appliance that is not certified to the environmental standards for the CSA or the US EPA.  So if it doesn’t have one of those two stamps on it, it is not a legal appliance anywhere in Québec even if it was a great bargain at the yard sale.