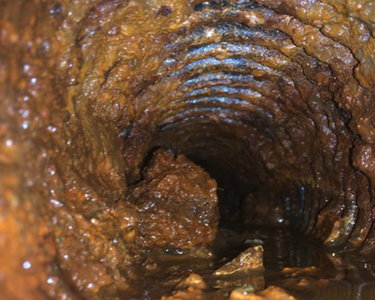 Iron ochre is a rust coloured sludge that accumulates and clogges perimiter drains in certain soils.  It is often found the Eastern Townships of Quebec.  It is a very complex problem which can be controlled but not solved.  In fact the real solution in regions known to have iron ochre is to not build a basement but build on a slab-on-grade to avoid deep drainage tiles altogether.

I will not go into detail here because the best information available is on the Régie du bâtiment du Québec web site -- in both English and French.  Follow this link: https://www.rbq.gouv.qc.ca/en/you-are/citizen/particular-building-problems/iron-ochre.html