OVERVIEW: Keeping leaves out of rain gutters while letting the water through

We need rain gutters to collect the rain that falls on a roof and then take it far away from the foundation of the house.  That, together with landscaping that slopes away from the house, can solve 80% of all water leakage problems in basements, especially during the spring thaw.  But the search for the ideal rain gutter is not yet finished .

It is relatively easy to install rain gutters that can catch the water, although the drip edge that sends all the water into the gutter, rather than some of the water behind the gutter, is often forgotten.  The drainage slope of the rain gutter is important as is the number and placement of downspouts to handle the largest flow of water.  And some people with larger roofs, or just frequent downpours, may want to “oversize” their rain gutters so that their maximum water flow capacity is increased. 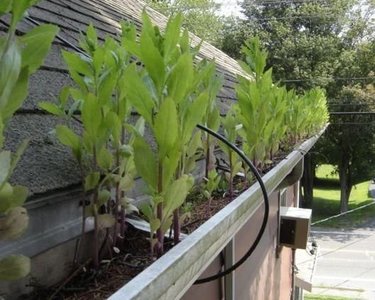 That is all fine but there are other elements than can interfere with the free functioning of a rain gutter.  First, sliding snow or ice can loosen the rain gutter or rip it off the fascia.  It is not good enough to simply position the rain gutter so it can collect water; it needs to be positioned with respect to the slope of the roof to give it a chance to resist an avalanche of snow.   In fact few installed rain gutters are properly positioned for sliding snow, not even my drawings below, but the use of the “shield” type of covers can protect the rain gutter from catching and going with the avalanche.

Then there are leaves, tree needles and wind-blown seeds that can turn that rain gutter into a soggy mess that grows plants better than it discharges water.  So for decades, coverings have been invented to keep things out of the rain gutter while letting the water in.  That is a lot easier said than done, especially in a northern climate where snow and ice get into the mix.

When a raingutter is in need of repair, who do you call?  That is really a difficult question.  Most roofers don't want to even deal with raingutters and even fewer are willing to come out just to fix an existing rain gutter.  Most rain gutter installers will tell you that you need a new raingutter.  They don't like to admit that it can be re-solidified and even straightened out and re-sealed water tight.  Most general renovators as well as your neighborhood handyman don't really know much about the complexities of raingutters -- size, slope, drip edges, roof protection, number of downspouts, getting water away from the foundation etc.  So often you are left with your brother-in-law as a last resort.

On Montreal's West Island I have found one company who has built a great business totally on raingutters and their maintenance.  Only recently have they added a line of new raingutters to their business -- as their core is still making what you already have work again and only replace it if you really must.  Adam's Eaves Gutter and Eavestrough Specialists, www.Adamseaves.ca have won my support with competent work that takes care of the details that I care about and great customer service.  Yes this is an pitch for them -- but they deserve it in a field that just doesn't have many specialists.

THE PERFECT NO-MAINTENANCE RAIN GUTTER – NOT YET !

You will have to read to the bottom to see what may eventually be the true maintenance-free rain gutter protector.  In the following illustrations, the blue line is the gutter protector shape, and the green colour is where problems occur with each shape. 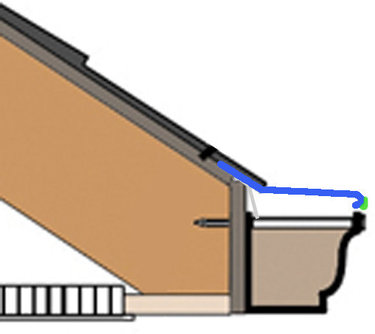 For years we have known that what I call the “SHIELD” category of rain gutter protection has performed the best to date but the cost of shield type products has prevented massive acceptance in the market.  Most of the shield type covers actually stick out over the edge of the rain gutter and then wrap back around so that the surface tension of the water causes water to flow back under and into the rain gutter from the font edge, while the debris falls off to the ground.

The minor problem with these expensive “shield” type of rain-gutter covers is that eventually that smooth front edge collects grime that interrupts that wrap-around flow of water, leaving more and more water to shoot over the edge onto the ground.  They do need annual or bi-annual cleaning of that front roll-over for it to keep working properly, pulling the water back into the rain gutter.  In addition they tend to let snow and ice slide off the roof much like metal roofs.  And if you have icicles on the roof anyway, this will just move them out to the edge of the rain gutter, but not eliminate them.

Follow this link for details on built-in or retrofit SHIELD style covers.

Screens or meshes that attempt to keep the leaves and debris on the top while letting the water through almost all have problems of eventually clogging up.  However if you have to choose between cleaning off a screen, or cleaning out the bottom of a rain gutter, the screen will require cleaning more frequently but with less work. 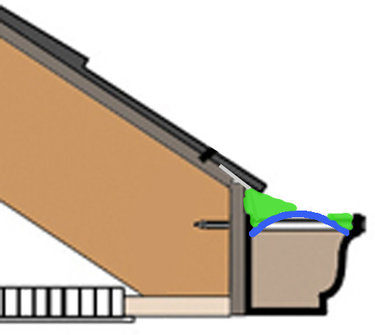 The most common are screens that bow-up.  The upward curve tends to give them some strength, but unfortunately they quickly collect a lot of stuff in the cavity between the screen and the house, often holding moisture against the fascia and rotting the wood. They collect finer stuff on the front trough and often there is very little open screen left to try and catch the water.  They are the least expensive, easiest to install and they work very well right up until sometime after the first dropping of leaves or needles. 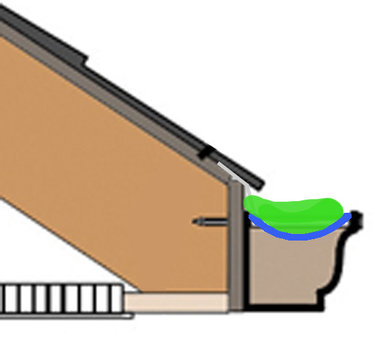 Many screen or foam type of protectors eventually sag, creating a thick layer of decomposing leaves and needles that pretty well eliminate water flow.  For a while I actually endorsed the Gutter Filter, which was a good quality nylon mesh that mostly filled the rain gutter – helping to avoid sagging.  Unfortunately it was so successful that several cheap off-shore copies came into the large box stores with very similar looking products that cost much less, and did not last into the second year.  And then, Mother Nature even caught up with the quality mesh and it began to sag and trap material about 5 years later.  It worked great right up until it started to sag and snag the junk.  It has all but dissapeared from the market since.  Anything that collects organic material long enough to create a mush is quickly doomed to fail.

The bottle brush version -- a long round brush that partially filled the rain gutter -- was the most fancifull of all.  It advertised that it would trap and hold the leaves until they rotted away and flushed down the downspout.  Good idea, bad timeframe as the rain gutter would continuously overflow long before that stuff had turned to peat moss– but it would make a great watered planter as on the photo at the top of this page. 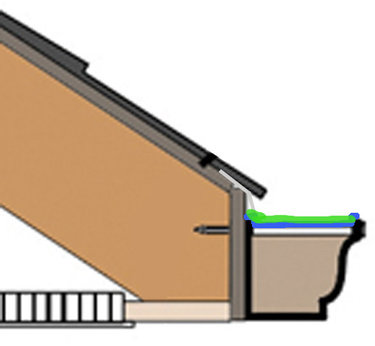 Probably the best of the screen type inserts is one that is an extremely shallow trough and firm enough to keep its position such as the Gutter Guard Pro.  It has a much greater chance to have leaves and debris blow up and out once the rain stops.  However they must be inspected to be sure that the holes are kept free of obstruction for them to continue to function properly as they don't have a free flow over the top to simply wash things away.

IS THE HYBRID SHIELD/SCREEN THE ANSWER? – MAYBE

Tek-Mesh is a Quebec invention that takes the shield concept up under the shingles and punches a bunch of holes it in like a screen. It has patented raised bumps, with holes in them as well, that tend to intercept the water, but not hold the debris.  At the same time these bumps give strength to the metal that allows it to be much lighter and less expensive than most shield products.   It actually stands up above the rain gutter and is attached over the outer edge of the rain gutter. Its ability to absorb a very heavy rain flow is exceptional. It leaves no place for debris to hide from the wind – so it cleans itself out well.  Being a shield, sliding snow isn't going to grab the outer edge of the rain gutter, and with the raised bumps, it does not promote snow and ice sliding as found with most shields. 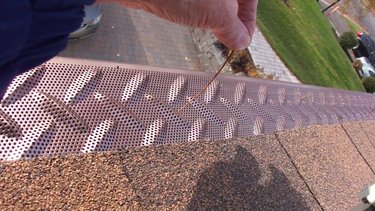 I have tested this product for three years on two houses.  It has the same limitation of all the shield products in that the rain gutter must be enough below the overhang of the roof to allow room to install it and still have a slope.  The slope of the roof must be just steep enough to not allow this little sheet metal addition under the front shingle to level out the shingle to where it will hold water.  It sheds everything, except some of the unusually fine pointed long needles from a Honey Locust tree that you see in the photo.

With those few conditions I call it a clear winner in spring, summer, fall and most of the winter.

FREEZING UP OF THE LITTLE DRAIN HOLES 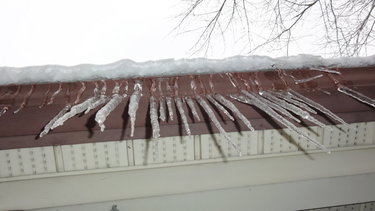 But it has had a major problem in the freeze thaw period when even a house with no history of icicles at all experiences the beginning of thaw followed by freezing.  A regular rain gutter is beginning to flow at this point, or freezing up and flowing again the next day.  A wrap-around shield will have the front edge free of snow and the thawing drip will wrap around into the rain gutter.   But with this product, the little holes ice over very quickly and while protected by a cover of snow do not thaw out while the sun is creating a little bit of melt water higher up.  That flows over the front edge, which does not go into the rain gutter, and then freezes on its way down to the ground; very little water flow but large icicles.  A clear winner for three seasons and most of the winter; a real problem for three weeks.

In the winter of 2018 we tried to add an electric heating cable to the insert but it had little effect.  Then they made their little holes just slightly larger and my testing with side by side product in freeze thaw conditions showed a great improvement. Apparently the surface tension of the water would no longer bridge over the hole, but nothing could get through.  They may have found the sweet spot and I am expecting great performance in the winter of 2019 from the Tek-Mesh product.