STOPPING WOOD HEATING SMOKE FROM COMING INTO YOUR HOUSE.

IS THERE A FIRE IN THE NEIGHBORHOOD?

December 2018 - As I was walking home from the grocery store in the Montreal suburb of Longueuil in one of the first cold days of winter, I found myself choking on smoke. 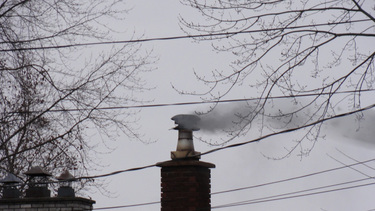 I started looking around to see if there was a house fire that was not yet reported – only to discover several chimneys sending heavy smoke into an inversion layer.  An inversion layer is a common climate occurrence where smoke doesn’t rise but is pushed back down to the ground.  It was obvious that several neighbours had started up their wood burning fireplaces that were not very efficient, or they were burning very poor quality wood.  I too have a no better than a moderately efficient fireplace insert and had already used it about a week before.  No house was on fire, but I could barely breathe as I walked down the street.  Only this year the total ban of inefficient wood burning appliances has gone into effect on the island of Montreal and here I was experiencing the public health reason for that ban.  For an article on wood burning restrictions in Montreal, click here.

SMOKE IN YOUR LUNGS

My wife had been complaining about bad air and trouble breathing so we had stopped using our own fireplace and started looking everywhere for mould.  Now it occurred to me that this smell outdoors was exactly what she was complaining about indoors.  Then it jumped to my mind that our whole house ventilations system was bringing that smoke right into the house and spreading it out to every room!  I turned it off, and things got a little better.

BUT AIR EXCHANGERS ARE SUPPOSED TO BE GOOD FOR YOUR HEALTH

Part of my profession is developing healthy houses and I am a strong proponent of HRVs and ERVs as essential parts to a healthy house – but not when the outdoor air is worse than the indoor air.  For years these devices have had filters to keep dust and bugs out of the system and recently I have seen some HEPA filters for them to help stop pollen – but I have not yet seen any serious effort to filter out smoke.

The most efficient odour filter is activated carbon.  We often have small carbon filters in table top air cleaners and if you think back to days when bars were dark with cigarette smoke there was always a large machine on the ceiling with heavy duty carbon filters and negative ion generators to make the place supportable.  It could be a great idea to put such a large carbon filter just after the HRV (to avoid the cold air freezing it) but before distribution around the house.  That way it would both filter outdoor air, but re-filer indoor air when in recirculation mode.  The most common operation of these units is 20 minutes of fresh air and 40 minutes of recirculation. But I have not seen large activated carbon filters for whole house air change units.   So I started to hunt.

WHERE ARE THEY HIDING IN THE MARKET PLACE?

Most large space carbon filters were self-contained, hanging from the ceiling and just like the table top air purifiers; they took air in one side and pushed it out the other side.  That was fine for a bar, but I needed one that I could insert right in-line with the duct system.   After a lot of frustration, even comments from some manufacturers that it would be a good idea but not yet available, I started to think outside of the box – who needed to clean odours out of air on an ongoing basis?

With the recent legalization of marijuana in Canada it suddenly occurred to me that all those illegal pot plantations hidden in basements of every city of this country needed to hide the odour these plants give off, while giving fresh air to the plants for growth.  So I stopped by my local hydroponics store – hydroponics being the science of growing food and herbs in indoor water tanks.  Sure enough I had a whole range of choice in large space odour filtration.  The one that fit my needs of having a duct in one end and a duct out the other end even had a brand name that fit its illicit purpose: The Stealth Air Box.  (2021) These filters are no longer available to the retail outlets but can be found and ordered for all of North America from AirBoxFilter.com.

So first I had to measure how much this very large filter would slow down the air in my air exchanger system, throwing the input and output out of balance.  It turned out to not be too bad, but bad enough that I couldn’t just adjust the balance with the built in HRV dampers.  So I needed a quiet in-line fan with a good speed control to compensate for the drag on the input side.  Of course the same hydroponics store had absolutely noise discrete fans and professional speed controls.

I was lucky that I had 4 feet of duct from the machine to the first distribution branch taking input air all around the house.  So about $500 later, I popped it out and inserted both the Air Box and the booster fan set to a moderate speed which just keeps the whole system balanced or slightly on the high side depending on the automatic speed changes in the HRV.  This prevents a negative pressure in the house from drawing that wood burning smoke in through cracks in the walls – while filtering out what comes in through the ventilation intake.

The day after it started filtering all the incoming air, and re-filtering all the air in the house in recirculation mode, my wife started breathing better.  Now when we step out of the house on a cold evening, we really smell the smoke polluted neighborhood – and just as soon as we walk back into the house, we take a deep breath of clean air.  Yes, the world is standing on its head.  I guess we will keep this device running like this at least until Longueuil implements the wood burning restrictions that are presently in force in Montreal.

Follow-up: Feb 2019  It has been in place for two months now.  We have never had such good air in the house. Because it works both in fresh air and recirculation mode, it cleans out kitchen odours (and burns) very quickly. If the fireplace backdrafts, the odour is gone within the hour.  And strangely enough, much less dust is collecting on my return air grills but the air flow measures the same as before.  Feb 2020 - This is the second winter.  I had the large carbon filter recharged with new carbon for this season.  It is still working wonders for both indoor and outdoor odours.

I have always understood the scientific arguments for eliminating small particle pollution as a health measure, now I see it is directly connected to a serious public odour problem as well.  Rather than “accepting” the Montreal legislation, I now am ready to actively support such legislation throughout urban Québec.

But best of all, I have discovered a working solution for living alongside wood stoves.  Years ago I had a TV viewer who had to sell their house in rural BC because of their neighbour’s smoke, their neighbour’s “legal” smoke that he refused to stop by buying a modern non-polluting stove.  I guess I am going to have to admit that the illegal pot plantations have had a positive product development side effect. With the pot solution, you can now keep that neighbour’s pollution out of your house even without their cooperation.