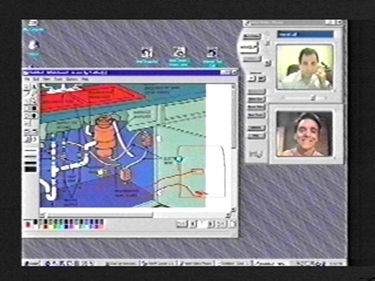 David from Richmand Hill, Ontario has installed a garbage disposal unit himself and has some questions about the electrical hook-up. We took advantage of the fact that David has a video telephone connected through his internet connection, which allowed us to see David, but more importantly, both David and I could draw on the same drawing at the same time. That's getting interactive with our viewers! (That was written in 1999 when few people were video conferencing. For a few years after 2016 we did that live on Zoom - but that was before many people had even heard of zoom, or video conferencing, so it died before its time.  Keep your eye on my Facebook for a comeback.)

It is critical when mixing electricity and plumbing, in garbage disposial units, washing machines and anything else connected to water related appliances, that the wires be wired properly. Essentially, the wire from the fuse or circuit breaker, called the Hot wire, must go to the switch. The other wire goes to the return connection, all those white wires in the electrical panel. If there is a third wire, often green or bare, it is connected to the casing of the appliance on one end, and to the casing of the electrical panel on the other end. If you reverse the two power wires, the appliance may work, but the casing risks carrying electricity even when the switch is off.  Touch the casing and touch a faucet and you are zapped.