Concrete, outdoors in the Canadian climate, has a particularly difficult time surviving. Walkways, patios, driveways and the like must have as much as 4 to 6 inches of gravel as a drainage base to minimize the effects of shifting from frost movement in the soil. Drainage around these areas has to be dealt with carefully to prevent undermining the concrete and causing sinking. But the composition of the concrete itself needs to be special for a freezing climate.

When water turns to ice, the ice crystals have a larger volume than the liquid water. You see this when ice cubes in the freezer develop little mounds on the top of each cube where the water has pushed up as it was freezing. When water saturates concrete and then freezes, it tends to expand and break the concrete bonds, especially near the surface. So techniques were developed to add microscopic air bubbles to the concrete to give the ice molecules room to expand without putting pressure on the concrete bonds. But for this to work, those bubbles have to be exactly the right size and they have to be uniformly distributed through the concrete. 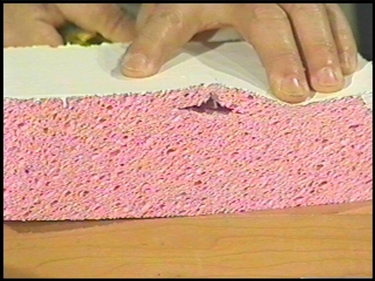 On TV I attempted to illustrate this with with sponges, pretending they were microscopic view inside the concrete. In the first photo I filled the space with my screwdriver as water would fill ordinary concrete voids. When I twisted the screwdriver it acted like expanding ice and forced a crack in the plaster that was on the top of the sponge. 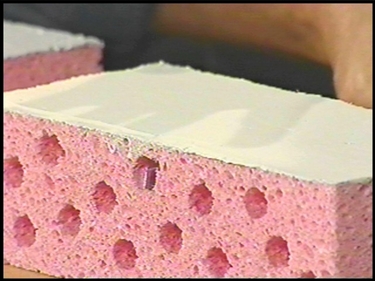 In the second photo there were holes that allowed my screw driver (the water) to turn around (ice expansion) without bothering anything. This is "air entrained concrete". Water comes in, ice forms but the expansion does not break up the concrete.

Up to now this could only be done consistently in a concrete mixing plant and sent out to a construction site in one of those large concrete trucks. This meant that it was impossible to do small jobs, or repair jobs with properly air entrained concrete, you couldn't get a truck to come out for one step, or one patio or sidewalk section. So bag mixed concrete repairs never lasted very long outdoors. 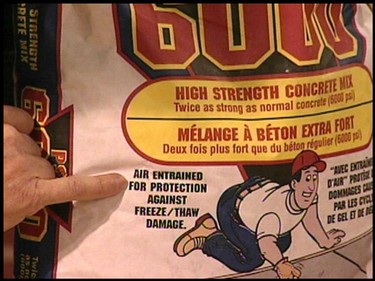 Finally one company developed a dry air entraining agent and were able to put air entrainment concrete into DIY and small job bags. But not many people understood it enough to pay the premium, so the product died. Then that company produced a High Strength concrete in a bag called "PSI 6000" by King Packaging. This too has the dry air-entrainment additive, which is finally being mentioned right on the package.  Unfortunately in 2016, this clearly marketed packaging no longer exists.  Check out High Strength or 6000 PSI concrect to see if the fine print mentions air entrainment.

In the microscopic world the details are important. Some people believe they can create home made air entrainment by adding soap to the concrete. A very bad idea as the bubbles are not at all right, and the soap itself can weaken the concrete.

Mixing with a shovel gives a decent mixture. Mixing with a barrel gives a very good air entrained mixture. For long lasting outdoor concrete in a freezing climate, it is worth every cent extra that it costs. This should be the only concrete in bags that you use throughout Canada with the exception of the mild regions of the lower mainland of BC and the island of Victoria. The reality is that less expensive non-air entrained concrete is often used for deck columns and fence posts, but if you want the surface to last without spalling, like a patio or walkway, use the air entrained mixtures.

**The core of this article was originally published as an article by Jon Eakes in Home Builder Magazine, the magazine of the Canadian Home Builder's Association.