Battery converters: to plug cordless tools into the wall 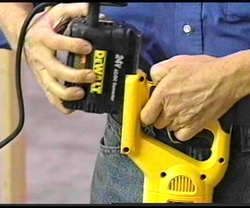 Can you have it both ways? Now with battery converters, transformers that are the shape and size of your power tool batteries, you can plug your cordless tools into the wall when you need power and the batteries aren't charged. This 24volt battery converter was made by DeWalt.

Well that was a good idea and more companies tried it, but it didn't last - not because it didn't work but because you didn't buy it. So a few years from now when you come up with the brilliant idea to have it both ways, realize that it was tried and didn't sell in the year 2000.