WHAT ARE THE RECOMMENDED INSULATION LEVELS? 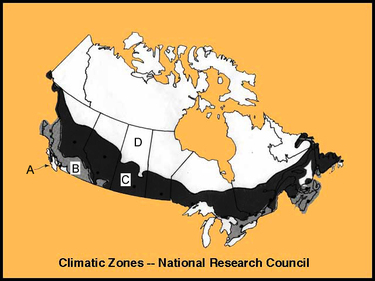 Back in the early 1980's there existed some fairly simple tables to guide homeowners in determining the insulation levels that they might want to put into the various parts of their houses. We had tables for standard houses, for energy efficient houses, super insulated houses and even for trying to upgrade existing houses. But then in 1995 the National Housing Code removed their tables, and quit referring to Canada as being divided into 4 simple climatic zones (which I have still reproduced in the graphic above). In fact, all the National Housing Code says is that there must be enough insulation to prevent condensation. This does imply that you will need more insulation in colder parts of the country, but says nothing about how much.

However, as part of this change, in 1997 the Model National Energy Code of Canada for Houses was published. Here energy levels got much more sophisticated. Rather than sweeping climatic zones across the country, each province has been divided into regions that take into account both climate and the type and cost of available fuel. Hence the recommended insulation levels in this document are based on a much finer cost analysis balancing insulation costs with both local climate and local fuel costs.

Now neither of these "National" codes are automatically law anywhere in Canada because each province establishes their own "Building Codes". Although most local codes are either based on these documents or carbon copies, not all jurisdictions have required insulation levels and many are different than in my table -- no to mention upgrading the requirements with each building code change. 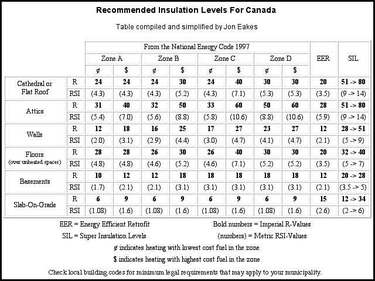 In this table I have brought together three different concepts in insulation that still make sense 20 years later. The large section, from the National Energy Code 1997, makes some rough generalities of all the many technical pages to give you a quick idea of the insulation levels you may need in your area to strike a cost effective balance between insulation and heating costs. I have brought back the climatic zone chart to allow me to get it all on one page, so check out which zone your city is in. Then the ¢ and $ columns refer to the cheapest and most expensive fuels in your area. If you are moving to an new part of the country, ask around on this one. Don't forget that electricity is the most expensive fuel in Alberta and the cheapest in Quebec! You will probably want to check the local codes before you build, as the details of the National Energy Code, or some modification of this, may be the law in your municipality with specific insulation requirements for each part of your house. 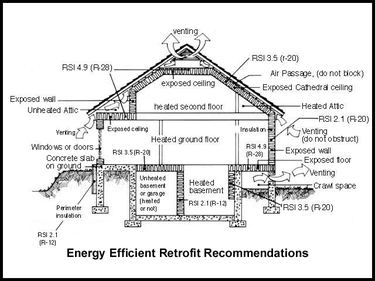 The EER or Energy Efficient Retrofit levels were originally developed in the early 1980's by the Canadian Electrical Association with the co-operation of what is today Natural Resources Canada. They were considered at the time to be the most insulation that you could reasonably expect to fit into an existing house when you wanted to upgrade the insulation. Today these should be considered minimum insulation levels to be achieved during any renovation. But you should keep an eye on the National Energy Code chart just in case you have enough space to accomplish higher insulation levels during your renovation. The payback will be good if you can get it in.

The SIL or Super Insulation Levels were also developed during the early 1980's and are still valid today for the very special reason that these levels do not aim at a traditional cost efficient balance between insulation costs and heating costs, but aim at creating a house that will heat with it's lights, appliances, solar gain and human activity -- no furnace, no fuel costs at all. When you add wind and/or solar energy generation to cover the lights and appliances we call this "Net Zero Energy".  It is anticipated that by 2030, if not sooner, Net Zero will be Canada's minimum building code standard for all new housing.  It was the University of Saskatchewan, together with the National research Council and the Saskatchewan Research Council that developed these recommendations. How do you justify the cost of these massive quantities of insulation? Partially by future fuel savings and partially by the serious capital cost savings of no major heating system. It is like thinking outside of the box. This jumps beyond incremental gains on the cost of heating, to eliminate the cost of heating. Can this really work? I was in one of these model houses on a sunny day in January when it was -40 degrees C outside and the only heating device, a small portable electric heater (the back-up furnace), was not even operating. Would you believe $50 a year to heat a 1,200 square foot single family detached house in the Prairies? Several houses have attempted to approach these "super insulation" standards in rewinterizing, although no one has ventured any recommended levels for renovation because of the great differences between houses.

The further complication to my table is the fact that all Federal codes are calculated and published in metric, which means RSI insulation values. If you multiply RSI by 5.679 you will get the old Imperial R-value, which everyone at the renovation centre still understands. I have done the math roughly to keep the table as simple as possible, but some of the strange numbers (that do not correspond to any insulation product on the market) are there because of both the scientific nature of the calculations and the shift from metric to Imperial. Remember, this table is a guide, not the law, and it is full of a lot of compromises just to get it all on one page. It will give you a good idea of what you want to accomplish. Check local codes for any specific minimum requirements in your area, and I hope you are insulating beyond the minimum's anyway.

How can you relate to all these numbers for renovations? The "Super" levels are not worth striving for unless you are going to do the whole house this way, including "super" windows, as only then can you really eliminate the cost of major heating installations. The EER and the Energy Code recommendations can effectively be mixed, trying for the higher level whenever possible and working hard to not fall below the lowest levels where things get tough, such as in walls.