How to get squirrels out of the attic? 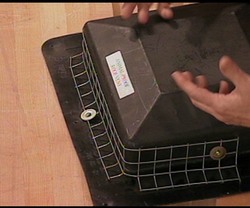 One of our viewers asks the question for a friend of hers, how do you get squirrels out of the attic?

First you must prepare to keep them out, even if they are already well nested in your warm comfortable attic. That means installing solid screen mesh over every possible entry -- some of the most common are the roof vents and soffit vents. They can chew their way right through all plastic and even most thin gauge metal vents.

Now you don't want to trap them inside, both for humanitarian reasons and because dead bodies in the attic is not a good idea. Live squirrels running around is not a good idea either because they often chew on electrical wires, causing fires.

So just before you close up the vent, put some peanut butter inside the vent where you can see it, but where no squirrel can eat it from the outside. Check a day or two later. If the peanut butter has been eaten, you still have squirrels inside. Wait a day, take off your mesh and sit back on the far end of the roof. You will probably see them head hungrily out. Then put more peanut butter inside and close it off again. When no critters are eating your inside peanut butter, you have no more in the attic. If they keep eating, keep letting them get hungry and then give them an escape route, then close it off behind them. Mice in the house will probably not find this food because they don?t climb trees or try to negotiate roofs.