What does R-factor mean in thermal insulation? 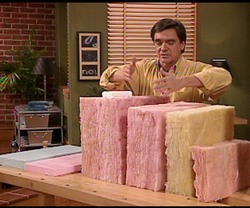 Then we got more complicated and came up with metric measurements, which in Canada we call RSI. Despite the metric movement though, most insulation is sold in both Canada and the US based on R-factors in Imperial measurements although you will see clearly R or RSI on the package. However Canadian and US R-factors are not exactly the same. The two countries have different measurement standards, so in general a material with a particular Canadian R-factor actually insulates a little more than a material with the same rating as a US R-factor. This is something that causes a lot of problems in border towns, where you may pay for a Canadian R and get an American R.

So what are these numbers? You can get a lot of information in other parts of this database by just looking up the keyword ""R-Value" ", including the specific R-factors for most insulating materials. But in general, the R-factor of any given insulating material represents how much it resists heat for each inch of its thickness. For every inch you add, you add this amount of thermal resistance. So as far a conductive heat loss goes, any insulating material with a given total R-factor will stop as much as heat as another material with the same R-factor. However we also lose heat through air movement, and through radiation. Some materials stop air movement better than others, and some have reflective values while others have none, so not all insulation materials with the same R-factor are actually equal. But if the insulation is in a closed cavity like a wall, with no air movement , all materials with the same total R-factor will in fact save the same amount of heating or air conditioning costs. So for example, although cellulose stops air movement better than say fiberglass, if you have an "air barrier" that stops the air anyway, the two materials will be equal as far as thermal performance goes.

You should only move away from the cheapest of the insulating materials when you need some other special characteristic, like a material that is rigid, or waterproof, or one that can drain water while it insulates, or one that gives extra insulation per inch where space is at a premium.