John in Mississauga, Ontario has paint flaking off of his crown molding, and it seems to be related to snow on his roof.

As we ran through the details, it turns out that the problem spot is right below a brick chimney that is poorly flashed where the roof meets it. He has put asphalt roof patch all around the chimney and that only seems to work for a while. I would say that John has figured out the path of the water, but not the right solution.

Remember that roof patch is just a patch, and not a very long lasting one. The real problem is that the chimney and the roof are made of such different materials, and move so differently, that the joint between them is always shifting -- hence cracks in the patching compound. 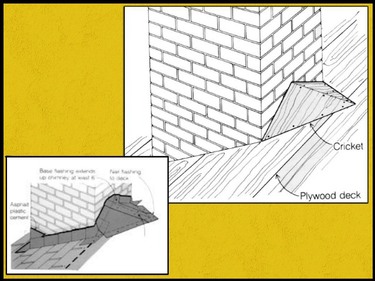 With a chimney, or even a skylight, one important detail is a "cricket", a small crowned piece of wood that goes on the roof in such a way as to divert water around the chimney so it doesn't slam into the chimney or collect where the roof hits the chimney.

Then the basic flashing is attached to the roof and run up the side of the chimney -- but not sealed to the chimney. That would just pull apart all too soon.

There is another flashing called a "cap flashing" that is attached to the chimney and covers over the first flashing. The two are not attached or sealed to each other. This way, they can slide over each other with normal house movement, but since the first one is sealed to the chimney and overlaps the second, the water is directed away from the joint. That is a permanent watertight junction between the roof and the chimney. And that should stop the water penetration that is causing the paint to peel off of John's crown molding.

Looking up Chimney Flashing in the Search tab will give show you pictures of what I am talking about: like this.