How do I install an exhaust fan in a basement? 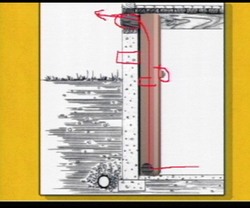 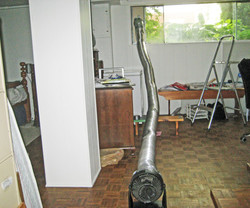 Draw air off the floor, not off the ceiling

Getting through the wall

Then you need to find a way to cut through to the outdoors. Most contractors will cut right through the concrete simply because it does not mess up any siding on the outside. Most DIYers will cut through the header section above the basement wall, because it is wood -- even if they then have to cut through the siding. Both routes work well as long as the outside hood is sealed against water penetration. If you have a window that will not be used you could replace one section of glass with plywood and go through the window -- an easy route, but not the most elegant.

Then if you put a dis-humidistat on the fan control so that it will run whenever it is too humid in the basement, you will get good basement moisture control. At least two companies have now made special units that do all of the above -- the one in the graphic is from the company Humidex. These can usually be found in renovation centres.

One radio listener had very strange lingering odours long after a renovation -- odours that just wouldn't go away despite the fact that three contractors said there was no more source of odours from the renovation.  So I suggested that she really clear out all the old air in the basement -- which meant that she needed to draw the air off the floor.  The second photo is the great photo she sent me -- not very elegant but she reported that the odour that had been lingering for weeks was gone in hours.

The air on the floor of the basement is dead air.  If the furnace return air grill is on the floor of  the basement, at least the air circulates and changes.  If you have a musty basement, do something to remove or circulate that air -- from going out the window as in this photo, or run up through a clothes closet and shoot the basement floor air onto the ceiling of the room above.  It will circulate and come back, but it will get refreshed in the process.